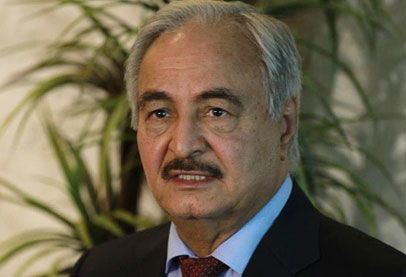 The family of late Libyan dictator Muamar Gaddafi have denied that they back renegade Field Marshal Khalifa Haftar against the internationally recognised government of Fayez Al-Sarraj, Al Jazeera reported today.

The Times reported on Tuesday that Ahmed Gaddaf Al-Dam, cousin of the former dictator, had told the British newspaper that the Gaddafi family were supporting Haftar on the basis of a future power-sharing agreement, noting that Gaddafi’s widow might return to Libya should the situation became secure.

“Haftar is working to rebuild the Libyan armed forces,” he reportedly told the British newspaper. In the eastern region of Libya, he has been combating extremism. He was approved and supported by the tribes and the parliament.”

Gaddaf Al-Dam was reported to have said that thousands of former regime soldiers had already returned to Libya to help Haftar, who has been fighting extremists as well as rebels against his bid for a return to autocracy in what Haftar claims is a campaign that will set the country back on track. Regarding the UN-backed government led by Fayez Al-Sarraj in Tripoli,

Regarding the UN-backed government led by Fayez Al-Sarraj in Tripoli, Gaddaf al-Dam was quoted by The Times as saying that it was “illegitimate,” and undesirous of peace.  However, in a surprising twist, Gaddafi’s family have since come out and distanced themselves from The Times’ report and

However, in a surprising twist, Gaddafi’s family have since come out and distanced themselves from The Times’ report and Gaddaf Al-Dam’s statements, saying that it has not asked anyone to make statements on behalf of the family, according to Al Jazeera.

The Gaddafi family statement said that the family never stood with “those who killed the sons of the nation and destroyed (Libya)” adding that Haftar himself was a “traitor” who celebrated the killing of the former dictator.

The differing accounts and statements emerging from Muammar Gaddafi’s family demonstrate that there could be divides within the former ruling family of Libya, and that Haftar may be attempting to work with former members of the regime to increase his own campaign’s momentum.