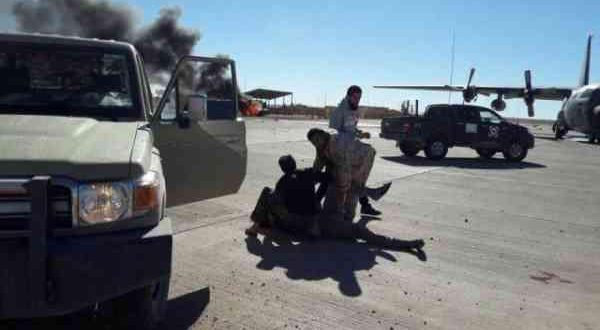 About a dozen airstrikes were conducted overnight on locations fro brigades from Al-Bunyan Al-Marsous operation in Jufra, Hun, Wahat Hotel, Sokna and other places.

According to Bushra News Agency, a number of civilian casualties were reported alongside the great damage that has been done to the areas hit by the airstrikes.

The fighter aircraft of Khalifa Haftar-led Operation Dignity also carried out airstrikes on different locations for the brigades of Al-Bunyan Al-Marsous in Hun and Sokna towns, Al-Jufra city in central Libya.

The very early attacks on Tuesday were confirmed by a tweet for the Spokesman of the Operation Dignity, Ahmed Al-Mesmari, who said that the airstrikes led to a great damage in the personnel and vehicles for whom he described as “terrorists.”

Operation Dignity calls all of its opponents terrorists and other names related to terrorism, like Al-Qaeda and IS.

On his Twitter, Al-Mesmari also said that their forces clashed with the security forces of Al-Busaifi military camp in Sabha and finally seized control of it with 7 military vehicles and captured 3 fighters and what he described as the group’s “Prince.”

Currently, news coming from Sabha says there are clashes in certain areas but without clear reference to where they are and what has so far happened as a result of the clashes.