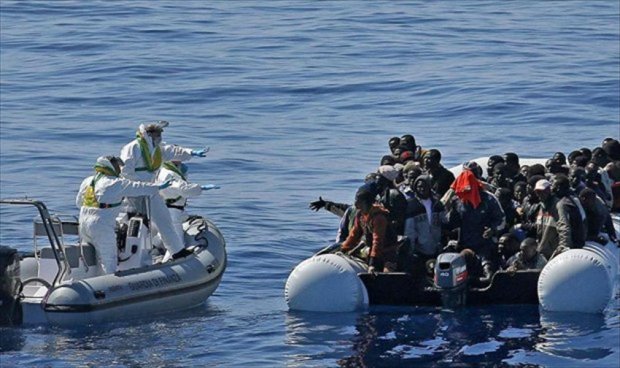 The Libyan coastguard “created mayhem” and recklessly endangered lives by threatening migrants with guns before looting their boats, the Doctors Without Borders (MSF) group said on Thursday.

On Wednesday, an MSF team in the Mediterranean was responding to a distress call when the Libyan coastguard also approached the migrant boats, “intimidated the passengers and then fired gunshots into the air, threatening people’s lives and creating mayhem”.

In the ensuing panic, about 60 people fell from the rubber boat into the sea, the statement added. Italian news agency RAI captured the incident.

“Two Libyan coastguards, wearing uniforms and armed, stepped onto one of the rubber boats. They took phones, money and other belongings from the passengers,” said Annemarie Loof of MSF.

“People became panicked and felt threatened. The passengers were terrified from the aggressive conduct of the Libyan coastguards,” she added, but as they had just received lifejackets from the NGOs, none of the passengers died.

“Our teams pulled 67 people out of the water as gunshots were fired in the air. It’s a miracle that no one drowned or was injured.”

Others yesterday were not so lucky, and elsewhere in the Mediterranean dozens died – mainly toddlers – when their wooden boat foundered.

Save the Children was also part of the wider search and rescue operation in the Mediterranean on Wednesday, alongside MSF, SOS and the Italian coastguard, and a German NGO Jugend Rittet.

In a statement, Save the Children said that while they believe the Libyan coastguard fired warning shots, “hostile behaviour caused panic and tens of people entered the water as a result.”

“This type of aggressive behaviour during rescues of multiple dinghies is extremely dangerous and endangers lives,” the statement added.

A Libyan coastguard spokesman vehemently denied that migrants had been shot at, or boats looted, instead accusing NGOs of encouraging human trafficking.

He did admit there have been incidents of crossfire with smugglers’ boats in the past.

1004 people rescued and welcomed onboard the #Aquarius today after an intense day of rescues @SOSMedGermany @MSF_Sea pic.twitter.com/ysbiqwA6NP

Speaking to MEE, Ayoub Qassem said: “We save people, and it doesn’t make sense to commit these crimes, in front of witnesses.”

The NGOs were to blame, he said: “They are facilitating the trafficking, with no humanitarian objectives. They should be investigated under international law – they are allowing them to be brought across.”

He invited NGOs to provide any evidence of the violence to the Libyan government. Speaking to MEE on Thursday, an MSF spokesperson invited the Libyan coastguard to get in touch to discuss the issue.

Yesterday saw 1,850 people rescued in the Mediterranean – a record number – from some 12 boats in distress.

SOS Mediterranee characterised this as an emergency situation, and one exacerbated by the response of the Libyan coastguard.

#Prudence is already full with 781 people onboard and there are still 5 boats to be rescued. Where are the #EU boats? pic.twitter.com/jaCskAlz4O

“This was one of the most complex and tricky rescue operations we have had since the beginning of our mission at sea – an absolute emergency,” said Mathias Menge, search and rescue coordinator aboard the Aquarius, the rescue boat operated by MSF and SOS.

“A new level of disorder was also reached, due to the fact that guns were fired by the Libyan coastguard,” the SOS statement added.

Preferring to die at sea

A Gambian survivor told SOS Mediterranee volunteers that he was ready to choose dying at sea over being forced back to Libya.

“When the Libyans pointed their weapons at us, asking us to give them all our money and cell phones and telling us to jump in the water, we did what they said and many of us jumped into the water,” he said.

“I was not afraid, I preferred to die at sea than being pushed back and to die in Libya.”

Save the Children expressed concern that some people appeared to be returned to Libya yesterday.

“Conditions in Libya are deteriorating. We have heard countless reports of men, women and children suffering from arbitrary detention, kidnap, violence and rape,” their statement said.

“Rescued refugees and migrants should not be returned to places where their security and well-being cannot be guaranteed.”

“Knowing that the Libyan coastguard has been receiving training and support from the European Union makes the incident all the more disturbing,” Loof, of MSF, said.

“We believe that the Italian and European authorities should not be providing support to the Libyan coastguard, either directly or indirectly. This support is further endangering people’s lives.”
Royal Navy training, EU funding
The UK and EU have helped train the Libyan coastguard, with the British Royal Navy providing “naval expertise, such as how to sail alongside, board and inspect vessels”.

The EU in January announced $3.4m in funding to the UN-backed Tripoli government, specifically for coastguard training.

A spokesperson at Frontex, the European border and coastguard agency, said: “We have very limited information about this incident and we do not know who the attackers were. As you are probably aware, there are many armed militias who operate in that area.”

A spokesperson for the British ministry of defence told MEE on Thursday: “We are aware of these reports; we take all allegations of human rights abuses very seriously, and take them into consideration for any support we provide overseas.”

SOS Mediterranee has criticised the EU response, or lack thereof, in the Mediterranean.

#MOAS will continue to reach out its hand to others, because #NoOneDeservestoDieatSea. It’s the only #human thing to do. pic.twitter.com/OWxnPgWyHG

“In the absence of Frontex naval units in the rescue area where most shipwrecks occur, NGOs were once more forced to step in to save hundreds of lives,” said Sophie Beau, vice-president of SOS Mediterranee.

And Timon Marszalek, the NGO’s director, urged European governments to do more.

“The imperative of maritime search and rescue cannot be left to NGOs alone: it is up to the politicians and international institutions to find an adequate solution to protect people seeking refuge.”

Security ForcesTrafficking and Migration
All
2017-05-25
asaeid
Previous UN Humanitarian Coordinator urges access to humanitarian assistance for people affected by conflict in southern Libya
Next I fought in Libya: Please don’t call us terrorists