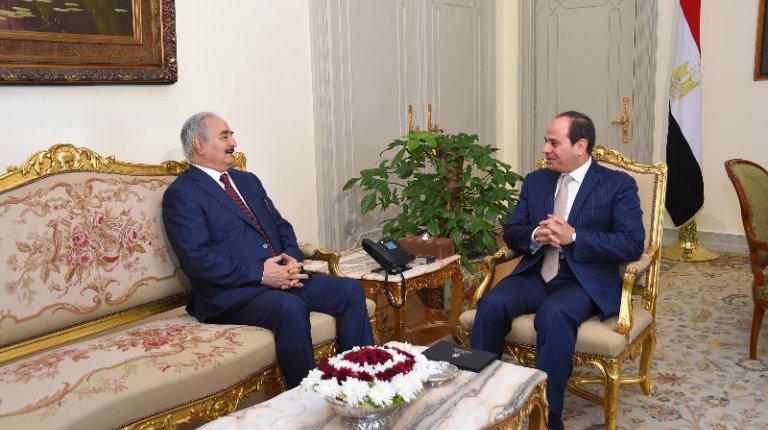 Libya could be source of Egyptian arms going to Sudanese rebels, say analysts

Sudanese President Omar al-Bashir has accused Egypt of backing the rebels currently at war with Khartoum, with analysts pointing to a possible link to Libyan general Khalifa Haftar.

Delivering a speech to the armed forces on Tuesday, Bashir announced the seizure of Egyptian weaponry by the Sudanese military from rebels in southern Darfur, but Egypt denied supporting the rebels.

A senior commander of Sudan’s rebel Justice and Equality Movement has previously confirmed that the group is fighting alongside Haftar’s Dignity Operation, having fought for former Libyan leader Muammar Gaddafi’s brigades during the 2011 revolution.

Field marshal Haftar leads a militia in east Libya which is opposed to the UN-backed Tripoli government.

“We took part in several clashes in 2011 and we had lost many fighters,” the Sudanese rebel commander said, according to the Libya Observer.

There has been speculation as to how the Egyptian arms reached Sudan, with analysts claiming that Egypt may have given the arms to Haftar’s forces, who then passed them on to the Sudanese rebels.

Egypt backs Haftar‘s Dignitary Operation, with Haftar confirming in January 2015 that his forces had received military assistance from Egypt, and Sisi rallying the international community for support for Haftar in May 2016.

NGOs have accused Haftar’s forces of committing war crimes, including the besiegement of civilians, mass killings and the desecration of bodies.

The Sudanese army released footage of the recovered weapons and vehicles, carried by Al Jazeera.

Tension between the countries

Sudan and Egypt’s relationship has been stretched in recent months, due to a number of issues, including a land dispute and visa restrictions that have put pressure on the countries’ commercial ties.

The allegations come a week before Sudan’s foreign ministry officials were expected to visit Cairo in an attempt to reduce tensions between the two countries.

Sudan has seen long-running clashes between rebel factions and government in the Darfur region over many years.

Bashir, who has spearheaded the war against the rebels, is wanted for war crimes by the criminal court. The charges include five counts of crimes against humanity and three counts of genocide.

In a statement, Egypt’s foreign ministry denied aiding the rebels, affirming its “full respect for Sudan’s sovereignty and it’s non-interference in any country’s internal affairs”.

The spokesperson added that “Egypt has always been the main supporter of Sudan’s North-South unity”.

South Sudan split from Sudan and became an independent country in 2011 after a decades-long conflict.