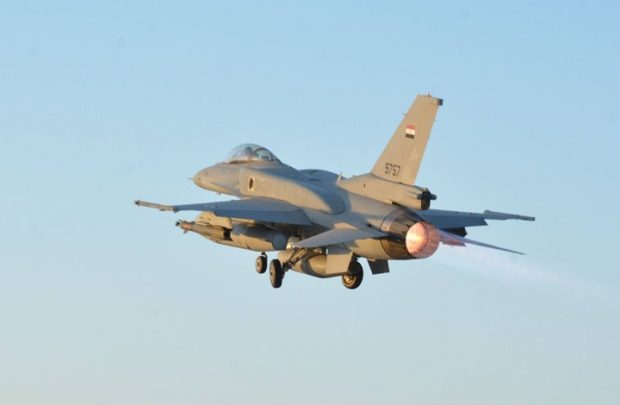 Jufra airbase came under attack twice today ­– early in the morning and then this evening – by planes believed to belong to the Egyptian airforce. As well as the base itself, held by Misratan forces plus members of the Benghazi Defence Brigades (BDB), a nearby headquarters of a separate Misratan unit is also said to have been hit. At one point the explosions were reported being very loud, suggesting that an ammunitions depot had been hit.

There are also unconfirmed reports of buildings in nearby Houn and Waddan being hit, including the municipal buildings in Houn.

So far there is no news of casualties.

The attacks follow those by the Egyptian air force on Derna yesterday.

There were six airstrikes on the Islamist-controlled town, supposedly in retaliation for the latest massacre of Egyptian Christians earlier in the day. The slaughter of 28 Coptic Christians in Minya province was claimed by the so-called Islamic State, although Derna is controlled by the pro-Al-Qaeda Mujahedeen Shoura Council which fought against IS and managed to expel it from the town in mid-2015.

The Egyptian authorities, however, have claimed that Al-Qaeda was behind the Minya massacre and that there were links between the killers and militants in Derna. In fact, a number of Egyptian mujahideen are reportedly based in Derna.

In contrast to the House of Representatives’ support for the Egyptian action, the airstrikes were today condemned by the Presidency Council (PC) as a violation of Libya’s sovereignty. In a statement, it said the attacks had been done “without coordination with the legitimate authorities” of the UN-backed government.

It added that while it was keen to cooperate with countries in the war on terror,  the Egyptian strikes had had “no justification” whatsoever.

The PC did, however, denounce the Minya attack, but added that it looked forward to future cooperation with international partners who targeted “the forces of evil,” while still respecting Libya’s national sovereignty.

The PC’s condemnation of the Derna airstrikes followed one by Prince Idris Abdullah Abed Al-Senussi.

“The decision by the Egyptian leadership to violate Libyan territory is a source of major concern and is unacceptable,” he said in a statement,

Libyans would continue to respect and work to consolidate the historic relationship with their Egyptian neighbours and they wanted to cooperate with it in all fields, including combating terrorism and extremism. But strikes on military or civilian targets by neighbouring states or the international community were a violation of Libyan sovereignty, he declared.

He also called on militias in Tripoli to stop fighting during the holy month of Ramadan.