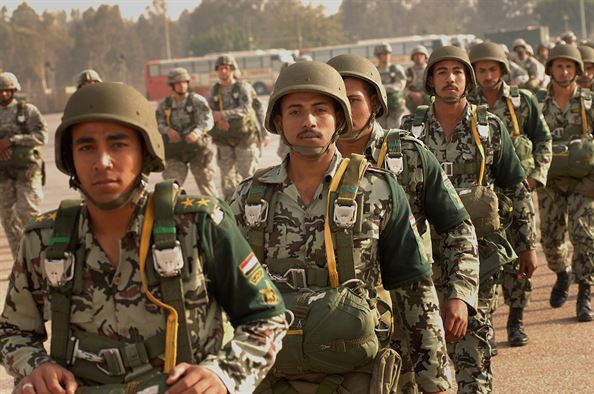 Egypt ‘deploys special forces to Libya’ to back Haftar

Egypt has sent “dozens of military personnel” to Libya to back its close ally Khalifa Haftar as Cairo presses ahead with attacks on terrorist training camps in eastern Libya, sources have told The New Arab.

Egyptian special forces and military intelligence officers have reportedly been deployed this week to bases controlled by forces loyal to Haftar to help plan an upcoming assault on the extremist-held city of Derna.

“Egyptian warplanes will provide air cover for the anticipated operation with operational flights lasting two weeks,” a security source, who spoke on the condition of anonymity, said.

“The strikes will indiscriminately target all the militias fighting against Haftar, whether they are al-Qaeda, the Islamic State group or smaller jihadi groups,” he said.

He added that the Egyptian military has expanded its presence on desert roads around the Libyan border town of Musaid after receiving reports that locals were helping militants cross into Egypt.

IS on Saturday claimed responsibility for the deadly attack in Minya – the latest in a series of IS strikes that have killed more than 100 Copts in Egypt since December.

But a source in Egypt’s foreign ministry accused authorities of using the Minya massacre as an excuse to intervene militarily to back Haftar’s forces.

“The incident has just provided justification, which has been strongly backed by local media, to go into Libya with aim of balancing out the conflict in favour of Haftar,” the diplomatic source said, asking not to be named.

He added that Cairo wants to portray Sisi as a “serious fighter against terrorism” and at the same time show Haftar’s other close ally the United Arab Emirates that Egypt will be a “decisive factor” in support for the military strongman.

The al-Qaeda-linked Mujahideen Shura Council in Derna, which captured the city from IS in 2015, has denied involvement in the Minya attack.

Egypt has carried out a number of airstrikes on its neighbour since Libya descended into factional fighting in the years following the 2011 civil war that ousted Muammar Gaddafi.

In February 2015, Egypt carried out air raids against IS in neighbouring Libya after a graphic video was released showing the beheading there of 21 Christians, almost all Copts.