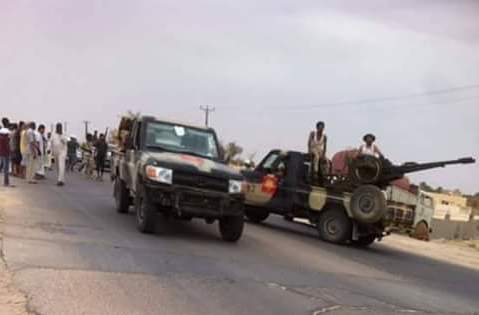 Clashes in Hun town in Jufra city between forces led by Khalifa Haftar and locals from Hun backed by forces from Benghazi Defence Brigades (BDB) have left over a dozen killed before Operation Dignity seized the city.

According to sources from media, Operation Dignity led by Haftar controlled Hun town and the forces spread on all the town’s checkpoints to secure it against counterattacks.

According to the sources, an uneasy calm is prevailing in Hun after the clashes.

The injuries and bodies were all taken to Jufra hospital as Hun and Waddan hospitals have no proper equipment for this emergency, according to medical sources.

Since late at night on Thursday and up until today evening, clashes between Operation Dignity forces backed up by air raids from Egyptian warplanes and Benghazi Defence Brigades and Al-Bunyan Al-Marsous brigades positioned in Waddan and Sokna towns in Jufra, central Libya.

According to sources from Jufra, the airstrikes were conducted by Egyptian warplanes allying with Khalifa Haftar’s forces and they targeted a number of state institutions.

However, the spokesman of the Operation Dignity, Ahmed Al-Mesmari, said that the airstrikes targeted what he described terrorists camps in Waddan and Sokna.

Egyptian warplanes raided last Friday Derna city on what it said locations for Derna Shura Council, and they are believed to have raided Hun town on Sunday as well, before Egypt had conducted second time airstrikes on Derna last Monday.

Derna residents went out to the public squares on Friday to protest the Egyptian assaults on Libya and on their city.