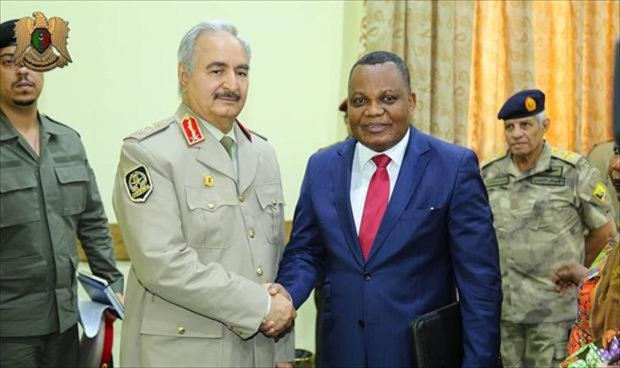 AU delegation wraps up its Libya visits with Hafter meeting

Throughout their various talks, the AU members have been seeking to organise a gathering of all Libya’s political players under the organisation’s auspice.

The eight members of the AU’s Libya committee were led by Jean Jacoso of the Congo and included ministers from Algeria, Conakry, Guinea, Mauritania, Niger, Tunisia and South Africa and the AU’s peace commissioner Ismail Sharqi.

They began their trip on 30 May with a briefing from UNSMIL chief Martin Kobler. Among their calls in Tripoli they met Presidency Council head Faiez Serraj and State Council leader Abdulrahman Sewehli. In Beida they saw House of Representatives president Ageela Saleh.

The only details released of yesterday’s talks wth Hafter were that they had ranged over political developments and also the fight against terrorism.