Home / Normal / Clashes reignite in Zawia as both sides reinforce 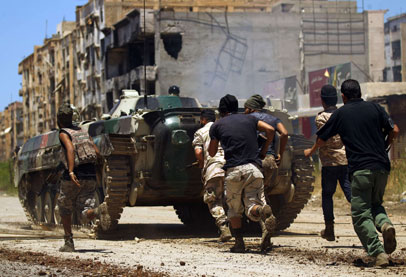 Clashes reignite in Zawia as both sides reinforce

Zawia settled into an uneasy calm today after clashes reignited last night between rival Ahneish and Khadrawi militias in the centre of the town. However, despite attempts by tribal elders to mediate a ceasefire, there are fears of fresh fighting. Both sides have been bringing in reinforcements in the expectation of a major battle.

The tension was sparked by the murder of one of the Ahneish commanders in a hail of bullets early on Sunday morning. In the subsequent fighting, Ibrahim Ahneish, the clan’s chief military leader, was also killed. He has now been replaced by Mahmoud Bilghait, but the Ahneish want revenge. There has been talk of them planning to take over the entire centre of the town.

For its part, the local Red Crescent has meanwhile announced it has helped transfer intensive care cases from Zawia hospital to to Sabratha hospital in case the fighting escalates further. Zawia hospital staff have also been evacuated to safer areas. The Red Crescent also said team had been to Jamal Abdel Nasser Street and part of Omar Al-Mukhtar Street to provide aid and to evacuate any families that want to leave the area.

Meanwhile, in a separate development, Zawia municipal council has accused the Central Bank of Libya (CBL) of discrimination. On Sunday, the CBL in Tripoli distributed LD 17 million to banks in Khoms. Zawia says that that it too suffers from a cash shortage and has double the population of Khoms. The municipality claimed it was being overlooked and the CBL was unfairly favouring Khoms.