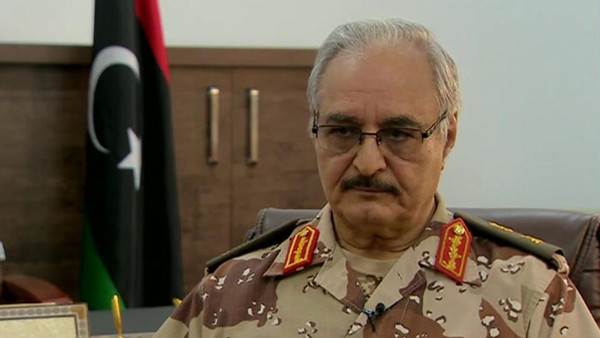 Haftar and Salafism: A Dangerous Game

There is a contradiction in General Khalifa Haftar’s narrative. Although he denounces his opponents as “takfiri terrorists and Kharijites” and accuses Misrata of employing political Islam, turning to takfiri groups for help, embracing the Muslim Brotherhood and the Islamic State (ISIS, ISIL, or Daesh), and supporting Ansar al-Sharia, he also has strong ties to Salafist organizations that are part of the forces fighting under his command in Barqa in eastern Libya.

This is a dangerous game because even though the Salafists that Haftar works with, called Madkhlists, supposedly do not take part in politics, they have been active politically and militarily in Libya since the February 11 revolution.

Haftar is using Salafi Madkhalists to counter takfiri groups like Ansar al-Sharia (which announced its dissolution recently), political opponents—in particular the Muslim Brotherhood—and to counter the Salafi scholarly discourse adopted by the Mufti of Tripoli, Sadiq al-Ghariani, and Salafi groups in Libya’s west, such as the Rada forces led by Abdelraouf Kara.

Salafi Madkhalism—named after the Saudi Sheikh Rabi al-Madkhali—was present under Qaddafi, who tolerated because it forbids elections and democracy and calls for absolute obedience to authority. Even after the February 11 revolution, Madkhalist leaders rejected taking part in the elections, although its members took part in them anyway, feeling it was the pragmatic thing to do.

The Madkhalists role in the current fighting became evident once Haftar launched operation Karama and Sheikh Rabi al-Madkhali issued a fatwa on the need for Salafists to join Haftar as Libya’s legal guardian and fight with him against the Brotherhood. In this context, Haftar dissolved the Madkhali Salafist brigade known as the Tawhid Brigade and incorporated it into his army, spreading it throughout various brigades and important military divisions such as the 210th Infantry Regiment and the 302nd Sa’iqa Special Forces. This allowed Madkhalism to spread further and gain control over military positions in Benghazi, Ajdabiya, and Jabal al-Akhdar.

Madkhali Salafism’s influence in Haftar’s camp does not stop there. On March 28, the internal security forces in Benghazi, controlled by Makhdali Salfists, instructed the Tawhid Brigade, known as the 210th Infantry Regiment within General Haftar’s forces, to arrest three young men planning an Earth Day celebration in the city. Abdel Fattah bin Galboun, one of the leaders of the Tawhid Brigade, considered it a form of un-Islamic Freemasonry, describing it as immoral and indecent and disrespectful to those who had died fighting. In the same context, Galboun praised General Haftar for rejecting such depravity, adding that the greatest threat facing Libya comes from the Brotherhood and ISIS. Moreover, the Benghazi Security Directorate decided to turn the planners over to the military for prosecution, but rescinded the decision and released the detainees once the news spread on social media and there was a public backlash.

In February 2017, the military governor Abd al-Razzaq al-Nazury in eastern Libya issued a decision to ban women from travelling without a mahram (a husband or unmarriageable kin such as a father or brother). However, he rescinded this decision after there was a public outcry on social media. Al-Nazury’s decision has been linked to Saudi preacher Usamah al-Utaybi’s visit to eastern Libya, since the decision came soon after the preacher’s visit. Additionally, those affiliated with Madkhali Salafism have committed numerous crimes to dominate religious space, such as the demolition of Sufi shrines and restricting Sufi religious activity in eastern Libya.

Haftar and the Madkhalists see their relationship as a win-win situation. Through its alliance with Haftar, Madkhalists aim to give themselves more control over the public domain in Libya. Madkhalism succeeded in increasing its followers through its control over religious discourse, attracting unemployed youth to Salafist brigades where they get military privileges and good salaries because of the brigades’ foreign backing.  The climate is right for Salafism to attract even more followers because of its dominance over the official religious discourse and its relatively significant military capacity on the ground. In turn, Haftar aims to take control of the public discourse through the Salafists and use them to fight his opponents, whom he calls jihadists.  Haftar needs the Madkhalists because he lacks the needed number of troops.

However, Using Salafist groups in political and military conflicts is a double-edged sword. Libyan society is dominated by Maliki-Sufism and will experience even more unrest with the infiltration of Salafism. In addition, there is the possibility of Salafi jihadism—especially ISIS and al-Qaeda—infiltrating Madkhali Salafist groups, which is easy in a war torn country and an armed society with no real state presence, which may lead to the emergence of even more radical armed groups. This is a problem that has happened repeatedly when Salafist jihadist groups succeed in infiltrating other Salafist organizations and use them to their benefit. It happened at the beginning of the Libyan revolution after the Transitional Council, and later the GNC, attempted to control Salafist jihadist groups like Ansar al-Sharia and incorporate them into the Libya Shield Force, but these attempts failed and ended in the war that has taken place in Benghazi over the past three years.

Khalifa Haftar’s ambiguous relationship with Salafist organizations may help him tactically on the ground in the short term, but harm him in the medium and long term. These types of relationships could increase the anxiety of Haftar’s allies within Libya, such as with the tribes of eastern Libya, who fear extremism and any challenge to the tribe’s authority and independence. As for Haftar’s external alliances, his relationship with Salafists could harm his relationship with his most important backers—Egypt and the UAE—as well as his relations with Western countries. These countries fear that Salafi jihadist groups will infiltrate Libya’s east through the Salafi Madkhalists, which could destabilize Libya and the region, especially neighboring countries such as Egypt, which fears for the security of its long and fragile western borders with Libya.

Absolute support for Haftar in light of his ambiguous relationship with Salafist organizations may have adverse consequences, especially for Egypt, the UAE, and neighboring countries if he fails to control his Salafist followers, if ISIS or some other jihadist group infiltrates them, or if they enter into a dispute with Haftar. His relationship with the Salafists is based on his personal relationship with them, not an institutional one, so if Haftar were to disappear from the scene, chaos may emerge once again in eastern Libya with these groups becoming a threat to the security of the region. 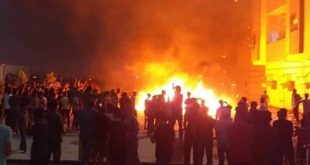