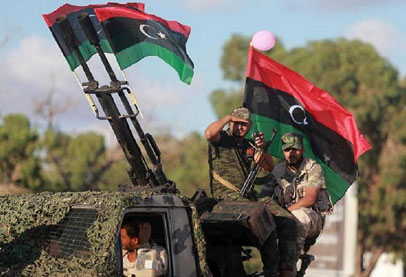 Misrata orders BDB and allies to disarm and disband

In a new display of unity in Misrata, leaders of the Bunyan Marsous Operations Room, of Battalion No. 40, the city’s military council and its municipal council have ordered the Benghazi Defence Brigades (BDB) positioned at the Baghla junction on the road south of Abu Grain to disband, surrender their weapons and their leader Mustafa al-Sharksi. If the ultimatum were ignored, the Misratans said they would use force against the BDB.

Referring to the backing it has had from the controversial grand mufti Sadek Al-Ghariani, the Misratan statement referred to the BDB as the “mufti’s forces”.

The statement represents something of watershed in Misrata. For the past six months, BDB sympathisers in the city, led by the military council headed by Ibrahim Ben Rajeb, have been trying to overthrow the municipal council and mayor Mohamed Eshtewi and install an authority opposed to both the Presidency Council (PC) and the Libyan National Army led by Khalifa Hafter.

However, the ejection from Tripoli of the anti-PC Fakhr Libya coalition last month, the Brak airbase massacre ten days earlier (said to have been partly carried out by the BDB), plus the humiliating retreat by the former Third Force from Tamenhint and then from Jufra airbase have both broken the alliance with the Benghazi militants and enabled the moderates in Misrata to force the city’s hardliners into silence and acquiescence, at least for the time being.

In another sign that the noose is tightening around the BDB’s neck, the Ajdabiya office of the LNA’s anti-terrorism authority says that it seized a BDB camp near Sukna after the militants launched a car bomb attack injuring one of the authority’s members. As well as taking a number of BDB men prisoner, the operation resulted in 12 tanks and several armoured vehicles being captured as well as large quantities of ammunition.