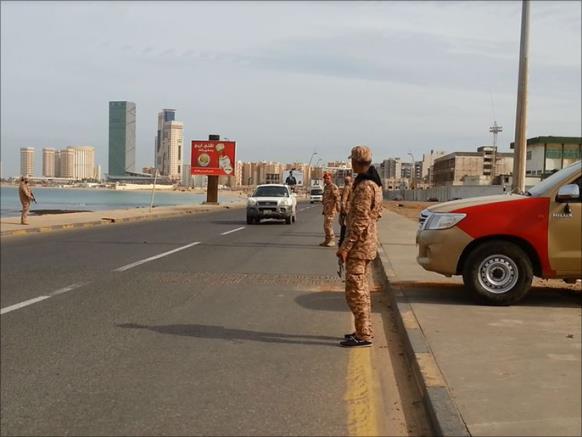 A report by the United Nations has confirmed the extent to which militias in Libya still dominate the country in the absence of a regular army and police force. It highlights how militias are often motivated by power and financial reward rather than loyalty to the internationally-recognized Presidency Council. It documents at least one attack by militias on the PC headquarters in Bu Sitta Naval Base. It also states that militias are linked to racketeering, smuggling and crime and have accrued huge wealth.

With regards to potential Libyan stability in the short term, the report also confirms that ‘‘in the absence of Presidency Council control and authority, this competition (between militias) is likely to lead to new clashes’’.

Listing ‘‘acts that threaten peace’’ in Tripoli and western Libya the report states (p14) that ‘‘clashes between Misrata-affiliated and Tripoli-affiliated armed groups continue to undermine the authority of the Presidency Council and security in the Libyan capital, causing many civilian casualties. These clashes have several drivers’’.

‘‘First, racketeering and kidnappings by groups affiliated with Misrata fuelled tensions. In March 2017, for example, Gurji, Ghoat al-Shaal and Hay al-Andalus residents blocked roads and attacked buildings protected by Misratah-affiliated and Jadu-affiliated brigades. The protests evolved into an armed confrontation between the Tripoli Revolutionaries Brigade and the Abu Salim Brigade on one side and Misratan brigades loyal to (self-appointed National Salvation Government prime minister) Ghwell on the other. The latter were ousted from the Qusur, Fallah and Gargarish areas’’.

‘‘Second, there is an ongoing power struggle over institutions. An example is the takeover by the Tripoli Revolutionaries Brigade of the General Intelligence branch in Hay al-Andalus (where it seized important archives) in August 2016, and the subsequent reaction of Misrata, from where a force led by Salah Badi was sent to recover the positions lost’’.

‘‘According to an Operation Bunyan Marsus commander, “Sirte was a trap to weaken us in Tripoli. We lost many men and vehicles during that war. We are trying to address the situation.”

‘‘In the absence of Presidency Council control and authority, this competition is likely to lead to new clashes, notwithstanding the Tripoli Agreement, signed (between militias) on 15 March 2017’’.

‘‘The assassination of Nader al-Omrani, a prominent Libyan scholar with the Dar al-Ifta, further exacerbated tensions. Several media reports alleged the involvement of Abd al-Hakim Meqdash, a former affiliate of Abd al-Raouf Kara, in the assassination. Such attacks reinforce the division of Tripoli into zones of control under opposing armed groups, limiting the freedom of movement, including of high profile personalities’’.

‘‘Along the coastline between Tripoli and the Tunisian border, many armed groups are involved in trafficking in persons and fuel smuggling, which have allowed them to obtain substantial wealth. Over the past year, these criminal networks clashed repeatedly, directly or through proxies’’.

‘‘In Zawia, dozens of casualties were reported in 2016 and 2017. Armed groups involved in criminal activities also challenge local authorities, such as the Sabratah Municipal Council, thereby threatening peace. On 17 August 2016, a speedboat attacked a Médecins sans frontières vessel off the Libyan coast. Two coastguard officers from the Dallah coastguard were involved in the attack. The two identified attackers are loyal to Abd al-Rahman Milad (alias Bija), head of the Zawiyah coastguard and involved in smuggling activities’’.

‘‘On 14 October 2016, a coalition of armed groups helped return Khalifa al-Ghwell to the High State Council seat in the Rixos Hotel in Tripoli. On 12 January 2017, the National Salvation Government took control of several ministries, including the Ministries of Defence and Justice. Al-Ghweil made use of the opposition to the Presidency Council of some Tripoli-based armed groups and the ambivalence of other armed groups (including the former Libyan Islamic Fighting Group) towards the Libyan Political Agreement’’.

‘‘At the time, the Tripoli Revolutionaries Brigade and the Abu Salim Brigade, supposedly allied with the Presidency Council, refused to oppose Al-Ghweil’s return to Tripoli, motivated by financial reward’’.

‘‘On 18 March 2017, members of the Buni brigade, in charge of protecting Mitiga airport, attacked the Presidency Council headquarters in Abu Sittah, attempting to evict the Council from Tripoli. The group’s leadership is close to Mustafa Nuh and Abd al-Hakim Belhaj’’.

‘‘On 10 April 2017, a force of 10 “technicals” attacked the residence of the Central Bank of Libya Governor in Tripoli. According to Central Bank sources, the attack was conducted by the Tripoli Revolutionaries Brigade and the Abu Salim Brigade, with the involvement of Hashim Bishr. Armed groups frequently seek to interfere in the business of financial institutions to promote their political or financial interests, including through intimidation’’.

‘‘The attack against the Misratah Municipal Council on 13 April 2017 highlights increasing tensions as irreconcilable political trends in the city are turning against each other. Positions diverge with regard to the Libyan Political Agreement, dialogue with eastern constituencies, links with radical movements and the situation in the south of Libya’’.

Conflict in the south of Libya

‘‘The unprecedented escalation in violence in southern Libya starting in April 2017, including air strikes from rival air forces, is another indication of the ongoing power struggles. The visible involvement of the Presidency Council and its nominated Minister of Defence in ordering an attack against LNA forces moving on Tamanhint has deepened the political divide’’.

‘‘The Tebu community, disappointed by the lack of support from LNA, is increasingly divided. For example, Hassan Mussa and Ali Sidi, influential military commanders from Kufrah, fought on different sides (the Benghazi Defence Brigades and LNA, respectively) in March 2017. Divisions are also deepening among the Awlad Sulayman, which fought alongside both warring parties during the Tamanhint clashes’’.

‘‘The situation in Kufrah remains very tense: 10,000 Tebu, most of whom are civilians, are still under siege by Zway brigades. In Awbari, in spite of the ceasefire signed in Doha in November 2015, discussions with Tebu and Tuareg leaders revealed persistent tensions, spurred by the national division and the lack of engagement on the part of the Presidency Council in the south. Armed groups that were previously paid and acting as regular forces are at present increasingly involved in illicit activities in order to finance their military presence in southern Libya’’.

Conflict in the oil crescent: Threats to peace

‘‘The struggle to control the oil crescent has reached its most violent stage over the past few months, increasingly taking the shape of a conflict between eastern and western forces. The Benghazi Defence Brigades, which are supported by the Presidency Council-nominated Al-Barghathi, have been joined by fighters from Tripoli, Misrata, Khums, Zliten and the South Shield Brigade. This is a critical threat to the stability and territorial integrity of Libya’’.

‘‘The series of events in the oil crescent between September 2016 and March 2017 have exposed the local population’s vulnerability when confronted with armed groups that are well equipped and financed. The recruitment and mobilization of local populations is leading to further fragmentation, as witnessed during the most recent attack by the Benghazi Defence Brigades against oil terminals in March 2017, when dozens of members of the Magharba tribe, recruited by each of the opposing sides, were first arrested by the Benghazi Defence Brigades and later by LNA. Exposed to the arbitrary behaviour of these groups, local populations risk becoming more receptive to the influence of extremist armed groups’’.

‘‘The presence in the oil crescent of organizations linked to Al-Qaida predates 2011, notably in the area of Nawfaliyah. It has grown with the creation of Ansar al-Sharia branches in Sirte and Ajdabiya, where they benefited from State resources provided by Khaled al-Sharif and Ibrahim Jadhran, respectively’’.

‘‘An ISIL document obtained by the Panel reveals business links between Usama Jadhran and ISIL commander Abu Usama al-Tunsi. Al-Tunsi was killed in October 2016 by Operation Bunyan Marsus, and his name appears on another ISIL document seized by the Operation. ISIL cells have spread across the oil crescent, notably to the Bani Walid and Nawfaliyah regions, according to sources from the Ministry of Defence in Tripoli. The presence in Nawfaliyah of Ahmad al-Hasnawi (linked to Al-Qaida) during the most recent attack by the Benghazi Defence Brigades in March 2017 raises a number of questions concerning Al-Qaida links with ISIL cells. Opposition between ISIL and Al-Qaida is less pronounced in Libya, which could facilitate the absorption of ISIL elements fleeing Sirte by groups linked to Al-Qaida’’.

‘‘The Panel received reports of movements of extremist armed groups in the mountainous region stretching from Lut to Abu Nujaym, at the southern edge of the oil crescent’’.

‘‘Foreign armed groups from Chad and the Sudan have been involved in looting cars owned by oil companies, which were then sold on the Sudanese market, in the city of Tinah. The current state of insecurity, in addition to the closure of oil terminals by the Petroleum Facilities Guard of Ibrahim Jadhran for over two years, until LNA took control in September 2016, have led to a general deterioration of the infrastructure due to a lack of maintenance’’.