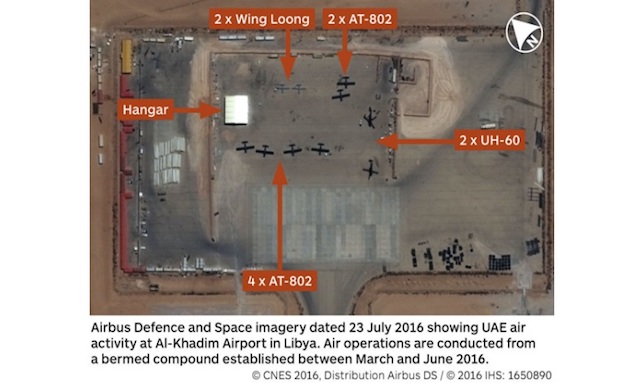 The story behind UN report on UAE violation in Libya

Observers consider the United Nations report on the UAE providing weapons to the forces of General Khalifa Haftar in Libya as a significant prove that UAE is interfering in the Libyan matter.

The member of the House of Representatives (HoR), Mostafa Abu Shagor, raises the question of “why the UAE sends those weapons? Isn’t it to kill Libyans?” Adding that “Emirate arms to Haftar further complicates the crisis.”

The United Nations sanctions committee confirmed, in its annual report, that Emirate involvement in violating the arms embargo against Libya, stating that the UAE provided Haftar with military equipment to back him in the civil war.

The report revealed that Haftar forces received Belarus made vertical jets and 195 fighting guns, besides other jets.

The report included photos of an air base south the city of Al-Marj, the forces of Haftar headquarter in the east, as the UAE developed the facility. The photos also depicted some fighting jets, other shows engineering work to widen the base.

The photos revealed planes and vertical fighters, developed by American companies exclusively for the UAE, a prove that it provided Haftar with fighting jets for military proposes.

The British Middle East Eye previously confirmed that Haftar used mercenaries to drive Emirati jets, based in one of his bases in the east, to bomb Benghazi Defense Brigades positions, last March.

It seems that it was not enough for the UAE, other reports said that it is involved in backing Haftar with mercenaries to drive its jets, as Haftar pilots are not well trained.

Two American journalists revealed in a report relations between Black Water manager, Eric Prince, and Libya when he came for a foothold, but failed and moved to cooperate with Haftar since 2016.

They said that without revealing the nature of contacts, Prince proposed a plan to the European Union, early on 2015, to address illegal migration in Libya, with the approval of high-ranking military official in Libya, but the proposal was refused.

It was revealed that this military official was Khalifa Haftar when the United States protested China’s approval to open a bank account for Prince, subject to legal investigations, to be revealed that the bank account was meant for Haftar to send money to Prince to hire mercenaries and provide weapons.

Prince’s lawyer, according to the two journalists, protested saying that the American authorities should have summoned Haftar for investigation on money laundering charges, because he is an American citizen, as his two sons Khaled and Saddam.

Last January, Intelligence Online magazine, said that Black Water company provided Haftar with pilots from South America to fly IOMAX AT-802 Emirati jets, based in an eastern base.

The magazine also said that Prince made contracts with the UAE to use a patch of Somali fighters, Black Water company trained in counter-terrorism programs in 2011, some of them arrived in Libya.