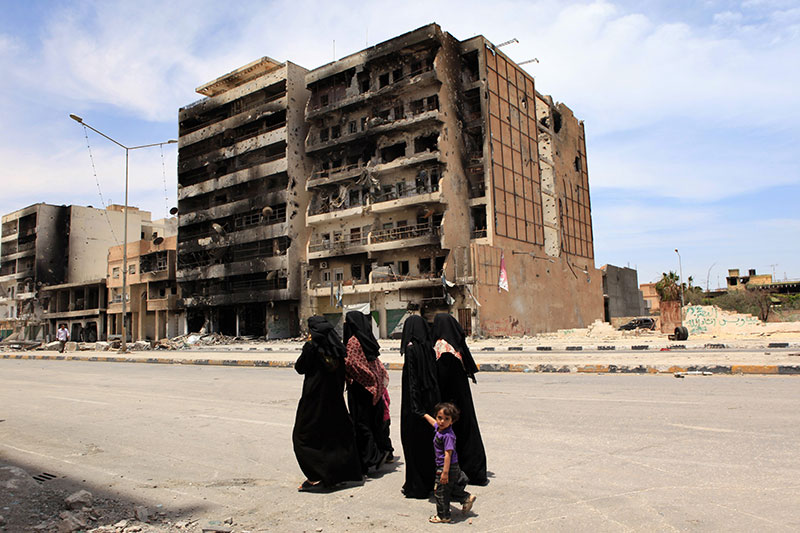 The Libyan Government of National Accord (GNA) has ratified an agreement to allows for the return of the displaced population of the city of Tawergha and should implement it swiftly, Human Rights Watch said today. Some Tawerghan families intend to commence the effort to return home starting on June 22, according to activists involved in the efforts.

In 2011, militias mostly from the coastal city of Misrata ransacked Tawergha, demolishing and burning many buildings in that city, which is situated 50 kilometers south of Misrata. They have since prevented the return of the city’s population, which fled en masse before their arrival. The displacement came in apparent retaliation for the support Tawerghans gave to then-leader Muammar Gaddafi during the 2011 conflict, and for crimes they allegedly committed in Misrata.

“Tawerghans have been scattered for six years, far from home and often living in abject conditions,” said Eric Goldstein, deputy Middle East and North Africa director at Human Rights Watch. “Now that Libya’s Government of National Accord has finally confirmed an agreement between the factions, it should waste no time to make concrete arrangements for the people of Tawergha to return home and resume their lives safely.”

On June 19, the Presidential Council of the GNA announced that it had ratified a United Nations-brokered agreement between representatives of the towns of Misrata and Tawergha on settling their conflict and allowing for the return of Tawerghans to their homes. Mohamed Ishtewa, the mayor of Misrata said that “further discussions would be held in coming days with our brothers in Tawergha during which the final arrangements will be made before their return to their city.”

In 2016, UNSMIL helped launch a reconciliation process between the people of Tawergha and Misrata with the aim of ending the displacement and compensating victims. The two sides signed an agreement on August 31, which stipulated as a main condition for the return home of Tawerghans the establishment of a fund by the UN-backed GNA to compensate victims of the 2011 uprising.

In April 2017, representatives of Misrata requested modifications to substantially increase the payments to seemingly benefit mostly Misratan victims. A second demand, to prevent compensation for any pro-Gaddafi fighters or sympathizers, would mostly affect Tawerghans.

The agreement includes a sole provision on justice: “The Libyan State shall take all necessary legal action to prosecute those accused” of crimes.

Libyan courts have yet to establish a measure of accountability. They have prosecuted only crimes attributed to Tawerghans, convicting them mostly for killings and unlawful possession of weapons, handing out prison and even death sentences. No Libyan court has yet prosecuted anyone for the forced displacement of Tawerghans, or for acts committed by militias, mostly from Misrata, against Tawerghans, including long-term arbitrary detention, torture, and enforced disappearance.

About 40,000 people from Tawergha live displaced around Libya, many in makeshift housing, camps or schools, prevented by civil and military authorities in Misrata from accessing their homes and lands.

Factions in Misrata, including the civilian administration and armed groups allied with it, control the area between Misrata and Tawergha, and have been physically preventing Tawerghans from returning to their hometown, insisting that the GNA and local Misrata authorities first approve a comprehensive compensation package for those killed, detained, harmed, or missing during the 2011 uprising.

In the aftermath of the 2011 uprising militias, mostly from Misrata, who had displaced Tawerghans then arbitrarily detained, tortured, disappeared, and harassed them with impunity. Although about 350 detainees have been freed since 2016, about 160 remain detained, some without charge, and 300 others are missing, according to Mohamed Radwan, the head of the Tawerghan association for families of missing and detained.

Although there had been fewer attacks on Tawerghans living in camps for displaced people in Tripoli in recent years, their situation is precarious. Militias guarding the Janzour camp for displaced Tawerghans in Tripoli fired shots on May 31 after disagreements with residents, although there were no injuries reported. On May 26, clashes between militias injured one resident of al-Fallah II camp in Tripoli, according to the UN Support Mission in Libya (UNSMIL).

The Guiding Principles on Internal Displacement provide that displacement of people needs to be limited in time and should not last “longer than required by the circumstances.” International law further stipulates that civilians who were forcibly displaced from their homes during a conflict should be allowed to return home as soon as possible without conditions.

In June 2013, residents attempted to return to Tawergha without an agreement with Misrata groups. Local and international actors, including UNSMIL, cautioned against it after armed groups in Misrata issued threats against Tawerghans planning to return. Authorities in the eastern city of Ajdabiya turned back a convoy of Tawerghans trying to make the journey from Benghazi.

Certain abuses committed as part of a widespread or systematic attack on a civilian population, including torture, arbitrary detention, and forced displacement, may constitute crimes against humanity. The UN International Commission of Inquiry on Libya concluded in its March 2012 report that Misrata militias had committed crimes against humanity against Tawerghans and that the deliberate destruction of Tawergha “has been done to render it uninhabitable.”

The International Criminal Court (ICC) has jurisdiction over war crimes and crimes against humanity committed in Libya since February 15, 2011. The prosecutor of the ICC has not started an investigation nor announced the intent to investigate crimes against Tawerghans.

“While the priority is to end the six-year-old collective punishment of people from Tawergha, the victims from both sides should also see justice for the crimes they have suffered.” Goldstein said.