Home / Normal / And the Benghazi battle still goes on 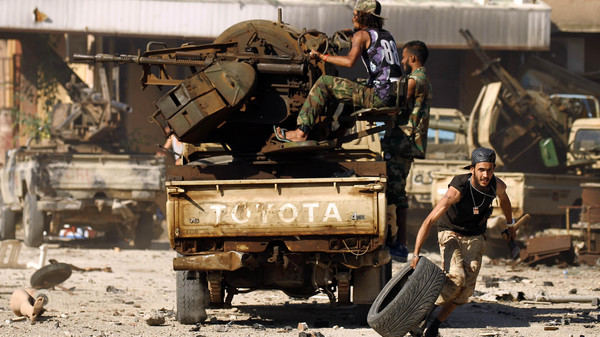 And the Benghazi battle still goes on

The full extent of the savage fighting to oust the last of the militants from Benghazi’s Sabri district became apparent today when the LNA admitted that since the start of the month, 78 soldiers had been killed.  Twenty-one of these had fallen victim to land mines and booby traps. The LNA did not give a number for soldiers who had been injured.

And the fighting is still not over. Two pockets of militants have resumed the battle from Sabri’s vegetable market and Al-Ruyain hotel. Jalaa hospital says six dead and 20 wounded soldiers have been brought to it in the last four days.

It is unclear how many militants are now involved in the fight, nor how they were overlooked in the LNA sweep of properties. Two of them were shot dead today as they broke cover. The LNA said they were apparently trying to flee the battle.  One of the bodies was pictured wearing a green T-shirt with an incongruous slogan clearly showing the word ‘American’ with a second word that might have been “Tradition”.

The exhaustion among LNA soldiers who were all jubilant 13 days ago when armed forces commander-in-chief Khalifa Hafter declared victory in Benghazi seemed clear. One soldier was sleeping on mattresses just a few hundred metres away from the fighting.