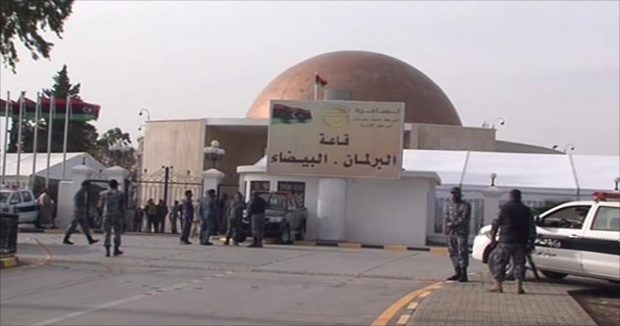 The Libyan Express was told by an internal source from the Constitution Drafting Assembly (CDA) of the whole details of the Saturday attack on Al-Bayda headquarters, where the Libyan constitution draft was approved by 43 votes out of 44 attending ones.

Two hours before the voting, the CDA HQ was encircled by protesters and the city’s security chief, Khalid Al-Basta turned up at the orders of the eastern Interim Government’s Interior Minister, Huseein Abbar, urging the CDA members to cancel the voting session.

The security chief of Al-Bayda ordered pulling out the security personnel protecting the HQ from protesters, some of whom were armed.

Then the CDA members called for pursuing the voting session and rejected the idea of the security chief to stop it, so the CDA chairman demanded the voting to take place as per legal procedures.

Later, protesters stormed in the HQ of the CDA and detained the members for about an hour and even took the mobile phones of several members. They also threatened and beat CDA member, Al-Hadi Buhamra, Salim Keshlaf and others.

Protesters demanded an on-air withdrawal of the constitution draft approval, but the members rejected.

After two hours of detention of the CDA members, elders and dignitaries from Al-Bayda convinced the protesters to set the members free on the condition that the CDA chairman announces another session on the next day to review the voting on the constitution draft. The chairman did so under pressure in order to protect the members.

They also said that the draft was legally passed and now awaits the decision of the Libyan people.