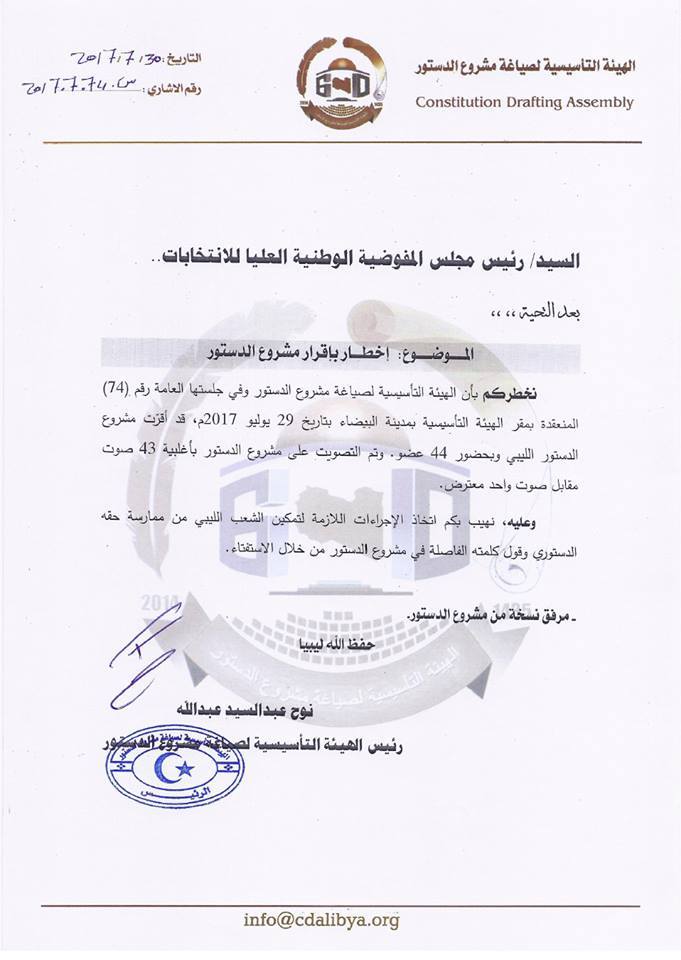 Despite confusion over the past couple of days as to whether the Constitution Drafting Assembly (CDA) had legally voted in favour of the final version of its proposed constitution, it today told the High National Elections Commission (HNEC) to prepare for a referendum on it.

HNEC has announced in response that it is ready to do so. Presidency Council head Faiez Serraj has also welcomed the passing of the constitution draft, saying said it would form the basis of Libya’s modern, democratic state. He asked that everyone respect the right of Libyans to express their political views without intimidation.

However, HNEC also noted today that it would need the HoR to pass a law so the poll could go ahead. Theoretically, though, a referendum is supposed to happen within 30 days of the CDA formally proposing a constitution. It then has to be approved to two thirds of Libyan voters.

There have been questions as to whether the CDA had properly followed it own rules when it voted for the draft on Saturday – questions its head in effect acknowledged later during the day by calling on member to return yesterday to re-run the vote. In the event, there was not repeat session and it was decided that the proposed constitution have been approved.

However, the two Tebu representatives on the CDA, Khaled Bubakr Wahli and Al-Senussi Hamid Wahli, have now announced their rejection of the draft on the grounds that it does not give sufficient rights to them and the other two ethnic minorities, the Amazigh and the Tuareg.

Under the law relating to the CDA and the referendum passed by the former General National Congress, not only does the proposed constitution have to be approved by two-thirds of the CDA, it also has to be approved by one each of the two Tuareg and two Tebu members (the Amazigh boycotted the election process).

There are known to be sufficient members of the House of Representatives opposed to the CDA draft – notably the federalists and those who want to keep the situation as it is. Technically, they do not have the right to debate, amend or reject the draft. Under existing legislation all they can do it is approve it and a law for a referendum. The decision to accept or reject it is left to the Libyan people. They could, of course, sabotage it by constantly delaying such a vote.

The announcement that both Tebu members are opposed technically short circuits the whole process. The HoR can now legitimately claim that without the two Tebu votes, the draft has not been legally approved and so there can be no referendum law for the moment.