Home / Normal / Unified command for Libyan Army to be selected 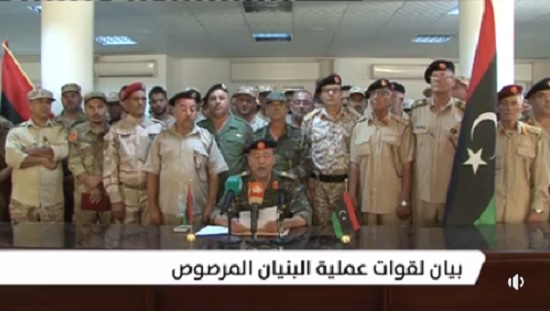 Unified command for Libyan Army to be selected

The Operation Room of Al-Bonyan Al-Marsoos (ORBM) has agreed to select a unified command for the Libyan National Army and the backup forces of revolutionary brigades on August 14.

In a statement on Thursday, the ORBM said the new command will be selected from all over the country, calling on the commanders of all military zones in the country to take part in the selection process, which will be held in the HQ of the military zone of the central region.

“After 10 days from the selection, military ranks will be given to the chiefs of revolutionary brigades, their aides and field commanders in order to lead their armed formations”, the statement read.

According to the statement, the unified command will take responsibility of buying the arms and ammunition from all the brigades so that they become exclusively for the army.

“There will be a plan to collect all weapons in the country in a period of time from six to twelve months,” it says, stressing that using arms must be restricted to security institutions only.

The ORBM demanded some Arab and foreign countries to stop intervening in Libya’s affairs and called the UN Secretary General and his envoy to Libya to urge them to do so.

“We thank the friendly countries including the USA, Turkey and Italy for helping us in the fight against terrorism,” it noted.