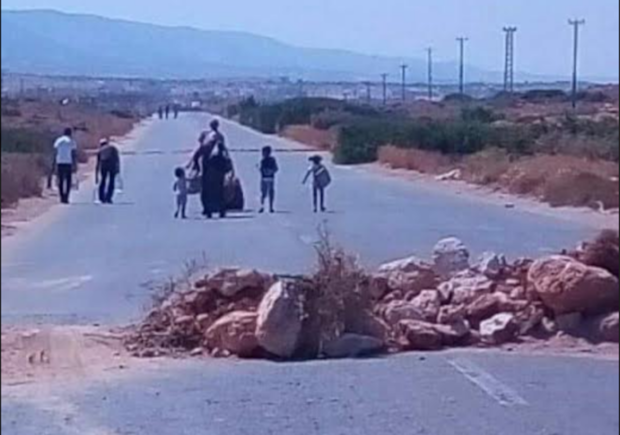 Inhabitants of Derna told Middle East Eye they feared for their lives as resources began running out. The city’s only functioning hospital, Harish, has warned of looming crisis as doctors struggle to find the medical supplies necessary to treat patients.

“I went to Harish hospital myself to see, and I found a bunch of women crying. There were no medicines and no doctors. They had no hope” one resident, Ahmed, told MEE.

Severe shortages of basic necessities including medical supplies, food and fuel have been reported by residents.

On Tuesday, Haftar’s forces shut down all land entry and exit points leading in and out of the city, after an LNA fighter jet was shot down by the Derna Shura Council, the coalition of militias that control the city.

Initially it was announced the road closures would last for two days, but the closures have so far lasted for seven days.

The Derna Shura Council has been in control of the city since 2015, after it kicked out members of the Islamic State group who had attempted to seize it.

Forces loyal to Haftar – one of a number of factions that have vied for power in Libya since a 2011 uprising ended Muammar Gaddafi’s four-decade rule – have for years fought to gain control of the city, claiming the Shura Council is a “terrorist” organisation along the same lines as IS.

On Friday, residents staged a demonstration in the city, protesting the siege and calling on the UN and other NGOs to act to lift the siege, which one resident branded “collective punishment.”

“Someone has already died due to the shortages, from kidney failure. The hospital didn’t have what it needed to treat the patient.”

The LNA launches occasional air strikes over Derna. They say they have been hitting militant targets identified on the outskirts of in Derna, including ammunition stores.

The Presidency of the UN-backed Libyan Government of National Accord (GNA) released a statement on Monday condemning the humanitarian situation in Derna, calling for “all relevant parties” to push for an end to the siege, and to put a stop to the “severe suffering” of the residents.

Derna’s local council has released a statement warning of a looming humanitarian crisis in the city, putting the blame on the UN-backed GNA.

The local council of #Derna warns of a humanitarian crises and holds the GNA fully responsible pic.twitter.com/RdAxwGJE0a

The UN has also expressed concern over humanitarian access to the city, stating that a “humanitarian crisis” could arise should the siege continue.

Many Libyans saying the much criticised siege of Derna by Hiftar’s LNA is a key test for new UN #Libya envoy @GhassanSalame https://t.co/ESOe9XVvVq

“The situation is extremely bad. Everything is stopped, the supplies are depleted and nothing is getting into the city,” one resident told Reuters by telephone.

“There is a total blockade with no entry or exit. They only allow you to leave as a displaced person.”

Attention has shifted to the coastal city after Haftar announced victory in a three-year military campaign against a similar coalition in Benghazi, 350 km to the west, a month ago.

The LNA is aligned with a parliament and government based in the eastern Libya that has spurned the GNA.

Haftar and the head of the GNA met in Paris in late July amid efforts to broker a peace settlement for Libya. A ceasefire was announced, though it excluded “counter-terrorism” operations. The LNA commonly brands its rivals as terrorists.

Haftar, a figure many believe is seeking national power in Libya, has enjoyed strong backing from Egyptian President Abdel Fattah al-Sisi, as well as the United Arab Emirates.

Western envoys have met Haftar frequently in recent months, and say he has to be part of any solution to Libya’s conflict.