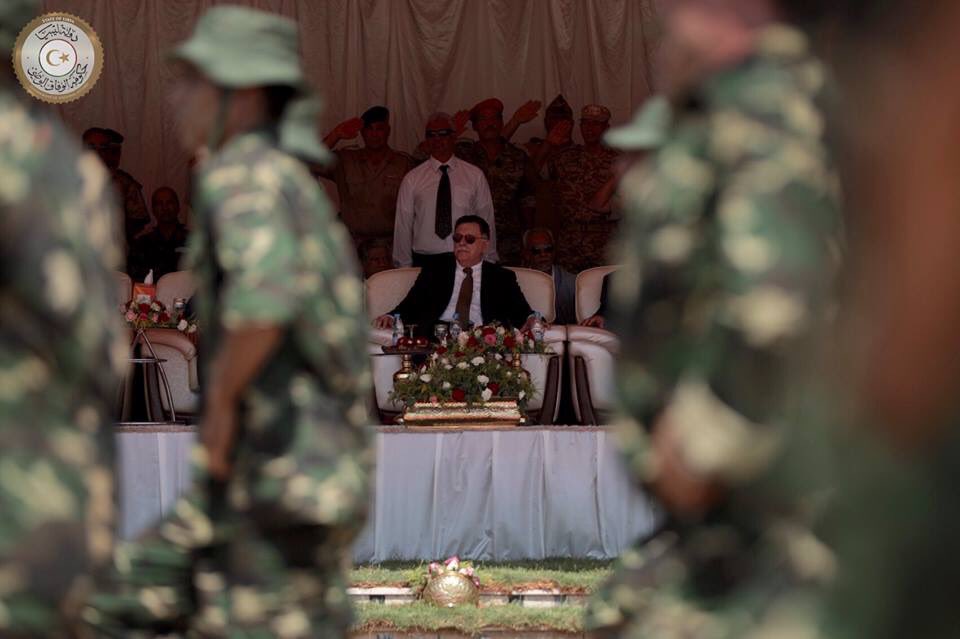 The first batch of Presidential Guard cadets today passed out at a Tripoli parade in front of Presidency Council (PC) head Faiez Serraj.

The setting up of the guard was announced in May last year,  but it not until three months later that its commander,  the then Colonel Najmi Ramadan Khair Al-Nakua was appointed. He has since been promoted to Brigadier-General.  In December, recruitment was still not under way and Nakua was saying that he would give priority to recruits with combat experience.

The PC did not reveal how many guardsmen graduated today.  Nor has there been any information on their training and equipment. The UN Security Council which is still imposing an arm embargo, has said that it will consider any equipment requests that the PC might make. It is not known if any such requests have been made and arms and equipment supplied. Nor is it clear if any foreign military personnel have been involved in training the Guard.

This May it was reported that members of the Guard had taken over control of the old Tripoli International airport in Gasr Ben Gashir. This would suggest either that the operation was mounted by partly-trained cadets or by other forces operating with the Presidential Guard’s identity.

Nakua said that the creation of the Guard marked an important turning point for the achievement of security, stability and the rule of law. This graduation class was, he said, a first block in the new Libyan armed forces.

Last week there were moves by the largely-Misratan Bunyan Marsous force to have itself recognised as the Libyan army. When he began recruiting at the end of last year, Nakua said he would welcome members of any militias but they would have to become loyal members of the army.

In its statement about today’s parade, the PC described Serraj as the Supreme Commander of the Libyan Army. In fact under the still-to-be-agreed Libyan Political Agreement (LPA), the supreme command of the armed forces will rest with the PC as a body, rather than the individual who heads it.