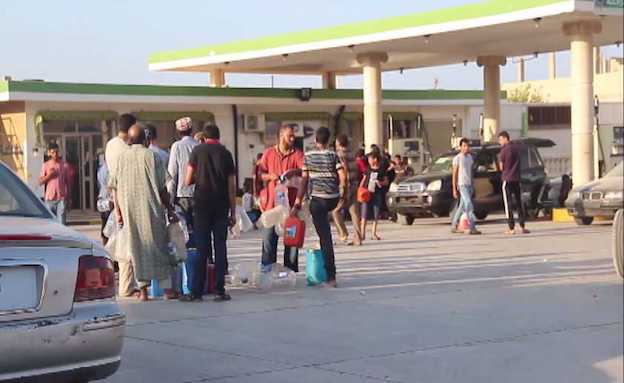 Sources from the city of Derna, eastern side of Libya, said, on Wednesday, that armed elements affiliated with the forces of the Dignity Operation that led by General Khalifa Haftar had shot citizens from Derna on the way to Martouba, eastern Derna.

The sources told LIBYAPROSPECT the tens of cars lined up at barriers that controlled by Haftar’s forces to prevent the citizens from entering Derna. On the other hand, Haftar’s guards allow only the ones who leave Derna to go.

Haftar’s operations room announced that it had opened the way to Derna from Martouba to let the citizen flee the city and return. But witnesses confirmed that Haftar’s forces open the way for displacement not for returning to the city.

The witnesses added that Haftar’s forces only allow transferring medications to the city because of the calls of human rights organizations.

The civil society corporations’ association in Derna said that this procedure is only a deception to show that Haftar’s forces are not besieging the city.

The association added, in a statement on Wednesday, that opening the way for the citizens to flee the city would worsen the situation and wouldn’t solve the crisis in Derna.

The association stressed that Haftar’s forces are trying to evacuate the city from its inhabitants.

The blockade on Derna made the students go to the university walking long distances because there is no more fuel for cars in the city.

The blockade prevented providing food, medication, and fuel to the city, which made the prices increased to make the life more difficult.

Observers said that besieging Derna reflects that Haftar is not evaluating the risk, which adds more reasons for increasing the numbers of the death toll and the wounded as well as the poverty in the city.

The observers called for a rethinking of this blockade because Haftar’s media and followers tried to convince the general opinion that the inhabitants of Derna support terrorism.

Moreover, it is significant to remember that Derna Shura Council defeated the terrorist groups of Daesh last year, which raises the question about the reasons for Haftar’s blockade on Derna.

The observers said that Haftar is trying to mix the cards because, on the one hand, he says that he aims to free the city from terrorism but on the other hand he allowed Daesh to move freely from Derna last year to go all the way to Sirte without any restrictions.

It is worth mentioning that Haftar’s forces are besieging Derna for about one week with no clear reason.