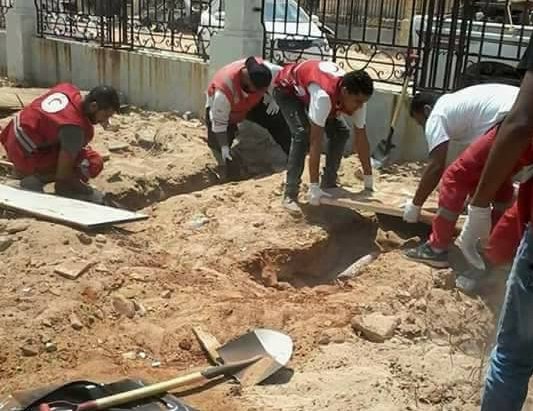 Another mass grave found in Benghazi

Members of the Red Crescent in Benghazi have been excavating a new mass grave discovered in Sabri. Ten bodies were recovered from the site near the National School and were reburied yesterday in Hawari cemetery. None was identified but it is believed they were the corpses of militants rather than Libyan National Army (LNA) soldiers or civilians.

As the fighting reached its final intensity, the militants took to moving their dead to rooms within buildings. It is therefore likely that the bodies in the Sabri mass grave died earlier in the fight to reclaim the last two districts of the city from the Benghazi Revolutionaries’ Shoura Council and their IS and Ansar Al-Sharia terrorist allies.

A Red Crescent member said that it was expected that as unexploded ordnance was cleared from Sabri and Suq Al-Hout, more mass graves would be found.