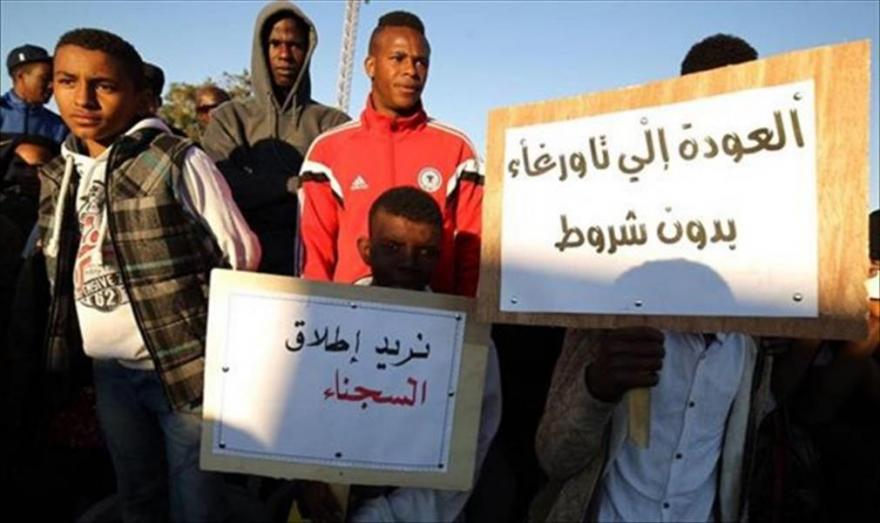 Six years since the Tawarghas were displaced from their hometown by Misratah militia forces in August 2011, the community of about 40,000 people are still unable to return safely to their homes, Amnesty International said today.

Two months ago, in June 2017, a political agreement was signed paving the way for their return. However, the terms of the deal not been implemented and some of those who have attempted to make the journey home since have faced threats and intimidation. The agreement also fails to ensure access to justice and reparations for the horrendous abuses Tawarghas have endured in recent years.

“The failure to hold anyone accountable for the catalogue of abuses the Tawargha have suffered since they were displaced demonstrates the catastrophic consequences of years of lawlessness in Libya, where militias have committed gross human rights abuses with complete impunity,” said Heba Morayef, North Africa Research Director at Amnesty International.

“Without clear political will to enforce the agreement to ensure the Tawargha’s safe return home, the public commitments made in June will be little more than an empty gesture.”

In August 2011, fighters from Misratah attacked the neighbouring town of Tawargha, which was being used as a base to launch attacks by forces loyal to Colonel Muammar al-Gaddafi. The Misratah forces drove out all of Tawargha’s inhabitants, looting and burning their homes and converting it into a ghost town.

Over the following six years, the Tawargha community has faced relentless reprisal attacks from Misratah forces, including arbitrary arrests, torture and other ill-treatment, enforced disappearances and extrajudicial executions. To date, there has been no investigation into these abuses and no one has been held to account for these crimes.

Previously, military and political leaders of Misratah have repeatedly stated that they would not allow the Tawarghas to return to their hometown. The town’s former residents are now displaced throughout the country, living in makeshift accommodation, often in appalling conditions.

The agreement, signed on 19 June 2017 between leaders from Tawargha and Misratah, the Government of National Accord and other officials, fails to ensure accountability for the crimes under international law and other grave human rights abuses committed against the Tawargha people, therby reinforcing a climate of impunity. Many in the Tawargha community welcomed it because it appeared to at least guarantee the conditions for a safe return.

“An agreement that blatantly ignores the horrific crimes committed against the Tawarghas was always doomed to failure. Only a deal that ensures the right of the community to return safely and prioritizes justice by ensuring that those responsible for atrocities are held accountable for their actions can offer a real way forward,” said Heba Morayef.

The first Tawargha families attempted to return three days after the agreement was signed in June. Despite public support for the deal from Misratah officials, the families were threatened and intimidated at a checkpoint by individuals from Misratah and forced to turn around and go back to Tripoli.

Emad Irqayh, a Tawargha activist, told Amnesty International that he set out for the town in a convoy of 35 cars on 22 June, after coordinating with individuals from Misratah who were supportive of the return. He said he was 1km away from the last checkpoint when he saw two cars turning back. “They told me they were stopped and threatened. So I called the other families who were in cars behind me and told them to turn back to avoid escalation, some of the women began crying,” he said.

On 29 June, during Eid, a smaller group of families made another attempt to return. One member of the Tawargha community, travelling with his 87-year-old mother, described the heartache and disappointment he felt upon his return to the town and their inability to stay there.“It was a very emotional moment I won’t lie to you, I had tears in my eyes, but the level of destruction of our home town is devastating,” he said, adding that he and his mother spent just a few hours there before having to head back.

“Libyan political factions must ensure Tawarghas are protected from all forms of intimidation, threats and attacks and order all affiliated-militias to allow the community to return safely to their hometown,” said Heba  Morayef.

“It is essential that the Government of National Accord and officials in Misratah, including the Misratah Local Council, take the lead in enabling and securing the safe return of the Tawarghas. This includes monitoring the return and settlement process, rehabilitation of homes, schools, and infrastructure of the town.”

As well as ensuring the safe return of displaced families to Tawargha, Amnesty International calls on officials in Misratah, members of the Misratah Municipal Council and Libya’s Presidential Council of the Government of National Accord and the Ministry of Justice to uphold the right of Tawargha victims to seek truth, justice and reparation for the human rights violations they have endured and continue to suffer.