Home / Normal / Libya’s children scarred and haunted by war: ‘It’s all they know’ 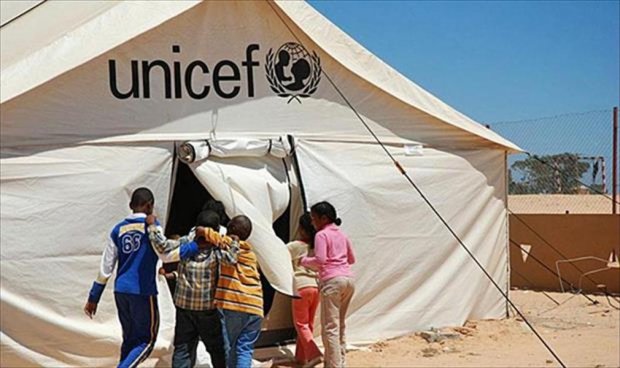 Libya’s children scarred and haunted by war: ‘It’s all they know’

“My children spent years running from the slightest of sounds; a knock on the door or the sound of fireworks outside. It took a long time for them to understand that not every sound was that of guns,” Ayah, a single mother of three, said as she ran after her six-year-old daughter Sarah.

Ayah is just one of many women in Libya who lost their husbands during the 2011 uprising that toppled Muammar Gaddafi and the war that ensued, and is among many that now have to bring up their children as single mothers.

“It’s not easy,” she said, the burden of bringing her children up alone clear in her tired eyes. “We miss him so much,” she added, as tears rolled down her cheek.

Ayah and her three children live with her in-laws, which she says has helped her a lot.

“The children always feel connected to their father with their grandparents by their side.”

Ayah’s brother-in-law was also killed with her husband during the war.

Ayah was pregnant during the revolution, and her youngest daughter never actually met her father. She was born two months after he was killed, but despite this, when she heard us talking about him she ran to the other room and brought out a picture of him. She handed it to me and said: “This is my dad.”

Ayah’s eldest daughter Mona, 10 years old at the time, developed post-traumatic stress disorder following her father and uncle’s deaths. She developed insomnia and was in denial for a long time. “She never wanted us to talk about it. If we mentioned they were gone she would hold her ears and hum.”

Mona’s uncle had promised to buy her a school bag before he died, and that was the one thing she kept repeating about him. She couldn’t seem to believe that his promise would not be fulfilled, Ayah explained.

“No matter what we said she wouldn’t listen,” she said.

Ayah lives with her family in Gharghour, an area in Libya’s capital, Tripoli, which was a base for Gaddafi forces during the revolution. Many high-ranking members of the military lived around them, as well as Gaddafi’s brother-in-law and intelligence chief Abdullah Senussi.

“We only stayed in Libya for a couple of months after the revolution started, but my two children at the time were affected badly by the experience. The area we live in was full of mercenaries and there was gunfire on our street on a daily basis,” Ayah told me as we drank tea in her living room in Gharghour.

A few months after the revolution started in February 2011, Ayah and her family fled to neighbouring Tunisia to keep their children safe, like many other Libyans.

A couple of months later, her husband and his brother went back to Libya to support the revolution, and that was the last time they saw them. Their family returned back to their home in Tripoli after their deaths.

Mona is now 16 years old and is two years behind at school. She still avoids talking about her father but she is much better. Ayah told me that she is unusually attached to her and her siblings and never wants to be away from them.

Civil war and instability have prevailed in Libya for over six years. Since the uprising in 2011, thousands of lives have been lost, people displaced and homes destroyed, as gunfire and clashes have become a normal part of everyday life.

‘It’s all they know’

According to local residents, children’s daily lives have become full of violence, with many youngsters now playing with toy weapons such as guns and swords, and in the streets children can often be seen splitting themselves into ‘militias’.

Violent language has become the norm even for the youngest citizens. Residents fear that this could be devastating for the future of the country.

Mustafa Mohamed, a father of five who remained in Tripoli throughout the conflict, is concerned that this normalisation of violence and weaponry among young children will have devastating effects on future society.

“If the new generation is already thinking in terms of guns and militias by the age of seven or eight years old, then how will they be able to focus on the positive aspects of society?” he said.

Residents say that children in Libya have been deprived of healthy and normal childhoods by the ongoing war.

“My youngest is seven years old, and my eldest 14. Every single one of my children, including my two daughters, plays something war-related with their friends. Whether it’s militias against militias while play-fighting, or it’s toy guns or swords. It’s all they know, all they’ve seen and heard about for over six years now.”

Weapons are widespread throughout the country, with a gun in almost every home, and RPGs parked in people’s driveways.

A report commissioned by the Small Arms Survey found that guns and weapons in Libya are also being sold on social media sites, especially Facebook, the BBC reported last year.

On 10 August, the United Nations children agency UNICEF warned that more than half a million children in Libya need help.  More than 80,000 children have been internally displaced and migrant children in Libya are particularly vulnerable to abuse and exploitation.

According to the World Health Organisation (WHO), Public health facilities have been dramatically impacted by the civil war in Libya. Forty-three out of 98 hospitals assessed are either partially functional or not functional at all due to a shortage of medicines, medical supplies and human resources.

In 2013, the WHO found that there were only 12 psychiatrists in the country, with most services concentrated in the two psychiatric hospitals, situated in Tripoli and Benghazi, Libya’s two largest cities.

Resources in this field remain extremely scarce in the country, with only one percent or less of total health expenditure targeted on this sector.

“The problem is we don’t have the provisions to deal with these issues. Most children end up seeing children’s doctors with no specialist training in psychiatry, which is a big problem,” she added.