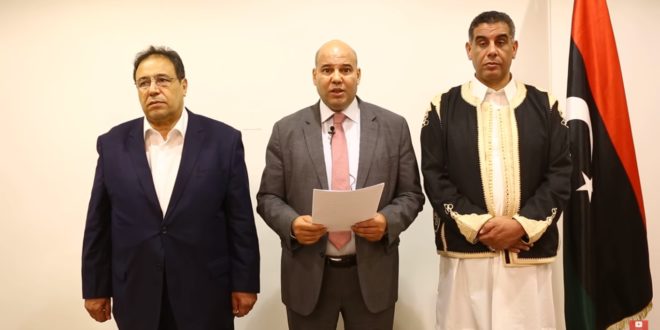 Three members from the Presidential Council of the UN-proposed government have rejected the orders issued by the Head Fayez Al-Sirraj.

Ali Al-Gotrani, Fathi Al-Mijibri and Omar Al-Aswad issued a joint statement Saturday refusing the individual decisions made by Al-Sirraj, saying they are not in the scope of his authorities.

“Al-Sirraj’s orders complicate the Libyan political and security conditions even more and harm the efforts aimed at reaching a holistic solution that involves all Libyans.” The three members said.

They also warned Al-Sirraj of the bad consequences of his violations of the political agreement, calling on all authorities to reject his decisions as they are invalid.

The three members also urged the international community and the UNSMIL’s Head, Ghassan Salame, to take a clear stance toward what they called the violations that destabilize Libya.

They said as well that they support the House of Representatives as the only legitimate body representing the Libyan people and the military institution led by Khalifa Haftar and by his chief of staff Abdelraziq Al-Nathori.

The statement came as a reaction to the appointment of Faraj Egaiem – a senior leader at Haftar’s forces – as deputy interior minister and Abdurrahman Al-Taweel as the temporary chief of staff of the Libyan Army.

Last Friday, Haftar weighed in and issued an order banning UN-proposed government’s officials from working in the areas under his control, adding that this order must be implemented even by the use of power.

Working from eastern Libya, the deputy health minister of the UN-proposed government, Ali Al-Zintani, resigned to abide by Haftar’s order, adding in his resignation letter to Al-Sirraj that he could not provide health care for tumor patients or Dignity Operation injuries in the span of three months.