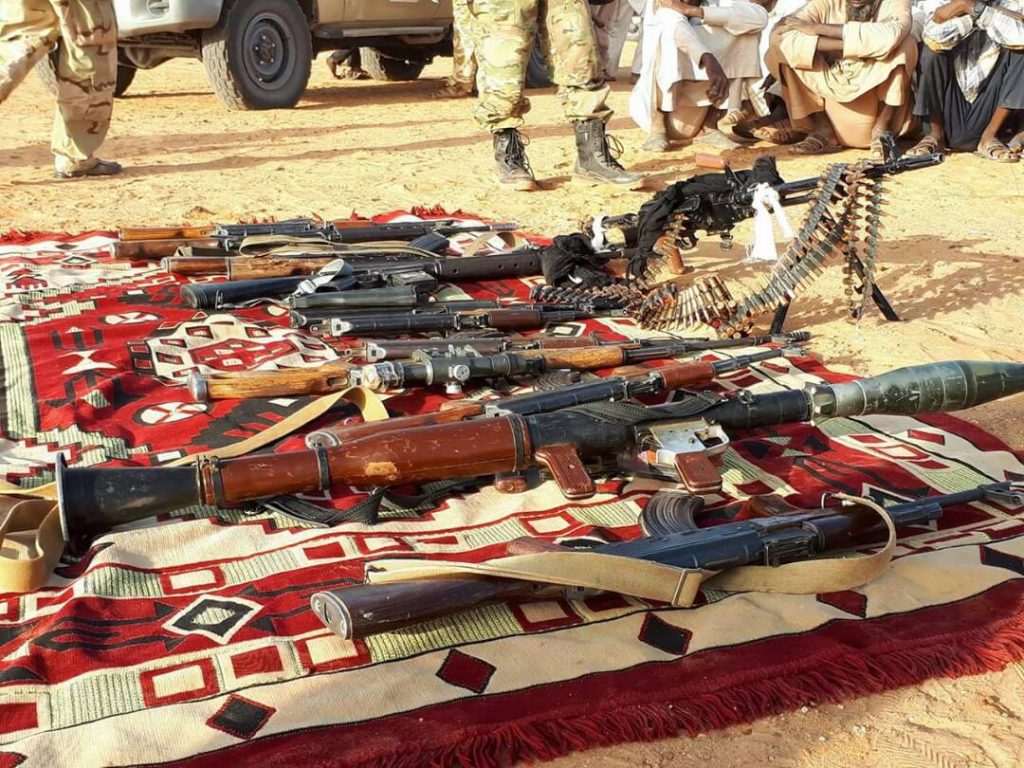 The Sukour Al-Sahra (“Desert Eagles”) Brigade captured a convoy of some 60 vehicles carrying Libyan goods along with their drivers, their Thuraya satellite phones and caches of arms this morning at the Kouri Bougoudi gold mine straddling the Libyan-Chadian border. Another 12 vehicles carrying Libyan-subsidized goods destined for Chad were stopped yesterday.

The moves follow the announcement by the well-armed, primarily Tebu brigade a couple of days ago that it was closing the Libyan-Chadian and Libyan-Nigerien borders. It said it intended to stop all goods and fuel smuggling across the two borders as well as the tide of illegal migrants.

It has had support from the former acting Libyan interior minister in the Beida-based interim government of Abdullah Al-Thinni, Colonel Ahmed Barka, himself a Tebu. On Saturday in Qatrun, he pledged his backing for the commander of the Sukour Brigade, Barka Shedemi, promising that the official authorities in Beida would also recognise the brigade’s activities.

“Some trucks are owned by foreigners, and others by Libyans,” said one of the brigade’s volunteers, Juma Al-Qatruni. “But we are making no preferences. We are out to stop the smuggling of all goods, fuel and electronic appliances,” he explained. However, necessary goods and a fixed amount of fuel was being allowed for the Tebu gold miners at the Kouri Bougoudi mine.

In January this year, the Chadian authorities closed their side of the mine, because of worsening clashes between various groups of miners and the proliferation of small arms, but the Libyan part remains open for the gold diggers.

“Small amounts of goods and fuel are allowed for travellers to the gold mines at Kouri Bougoudi and Aizzery, but definitely not an amount that would constitute cross-border smuggling,” said Al-Qatruni.

The clampdown by the Sukour brigade is because of increased smuggling throughout Libya’s south, where prices of basic goods and fuel have risen massively as a result. They have impacted on the wellbeing of southerners. Illicit deliveries of subsidised Libyan fuel south to Chad and Niger, for example, has resulted in the price of fuel in southern Libyan petrol stations soaring. It has now LD 2.500 per litre, whereas the petrol stations are said to be buying it for around a quarter of a dinar a litre. Other goods have also rocketed and are now sometimes beyond what ordinary people can afford. And that is quite apart from the severe shortage of cash in the banks.

It is not surprising then that the efforts to stop the smuggling has considerable local support.