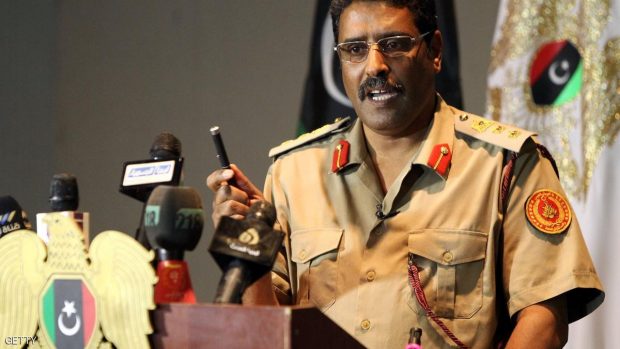 The spokesperson of the Dignity Operation, Ahmed Al-Mesmary, said in an Egyptian TV channel, that the Egyptian army supports the army that led by General Khalifa Haftar.

Al-Mesmary praised the Egyptian military by saying that it provides strong support for Haftar’s forces in Libya, adding that because the Egyptian army is preserving the dignity of the Arabs.

On the other hand, Al-Mesmary kept accusing the State of Qatar of supervising the terrorist groups in Libya. He said that his forces support the attitudes of the four countries who besiege Qatar.

Observers stated that Al-Mesmary tries to justify the Egyptian and Emirati military intervention in Libya by accusing Qatar even after the statements of the larger countries in the West who said many times that Qatar is not supporting terrorism.

The observers raise a question about why Al-Mesmary mentions Qatar who supported the Libyan revolution in 2011 and still supporting the Libyan to reach the instability and security in Libya.

Moreover, the terrorist actions in Benghazi on the hands of the army officers of Haftar’s forces are exactly like the ways that Daesh uses in intimidating the citizens.

It is worth mentioning that Al-Mesmary, said in a press release, last month, that his headquarters under the leadership of General Khalifa Haftar would not hand over Major Mahmud Al-Werfalli to the International Criminal Court (ICC). Al-Werfalli carried out executions against unarmed prisoners without a court in Benghazi.

Al-Werfalli killed tens of prisoners without trial in Benghazi. He is led by the commander of Commandos Forces, Wanis Bu-Khamada, affiliated with Haftar’s forces.

In the same context, the United Nations called, earlier than that, Haftar’s forces to start investigations on the executions without court.

Furthermore, the UN Human Rights spokesperson, Liz Throssell, said that “we are deeply concerned that, after recent fighting in Benghazi, people taken prisoner by members of the Libyan National Army, which controls eastern Libya, may be at imminent risk of torture and even summary execution.”

In the same context, the observers said that Haftar’s forces are not able to fight without the supporting troops of the Salafists in the eastern side of Libya, especially in Benghazi.

Moreover, Haftar’s troops are more than backed by the Egyptian and the Emirati air forces. The UAE airstrikes bombarded many locations in Benghazi. Also, the Egyptian forces helped Haftar’s forces using air raids and even on the ground.

On the other side, Qatar always denied such accusations and condemned of Al-Mesmary.

Last July, the head of the media office of the Qatari Foreign Ministry, Ahmed Al-Rmeahi, stated that the time and the contexts of the statement of Al-Mesmary don’t need any explanation. Al-Rmeahi added that Al-Mesmary received orders from some other sides, stressing that Haftar’s militias are outside the legitimacy and illegally supported because Haftar’s army is carried out war crimes against civilians. Al-Rmeahi pointed that Haftar and his spokesperson are not qualified to accuse any side of financing terrorism.

In Tripoli, the Presidential Council (PC) of the Government of National Accord (GNA) refused to boycott Qatar, clarifying that Qatar helped the Libyan revolution in 2011. The PC issued its statement when the Interim Government of the HoR announced to support the blockade on Qatar with Egypt, Saudi Arabia, the UAE, and Bahrain.

The states of Al-Mesmary came in the same context, especially after the scandals of the UAE who had violated the arms embargo on Libya.

Other Libyan activists said that people shouldn’t listen to Al-Mesmary’s statements because he is trying to attract the attention away from the failure of Haftar’s army. He also sought to put the responsibility on Qatar because Haftar’s army is illegal.

Furthermore, Al-Mesmary tried to justify the problem between his side and the PC, which is backed by the United Nations and the International Community; especially when Haftar refused many times to set down on the table of dialogue with the head of the PC, Fayez Al-Sarraj.

According to witnesses and observers, Al-Mesmary is affiliated with an army that has a militia background, adding that the proof is what happened in Benghazi a few months ago when the forces of Haftar dig the graves and abused the human corpses.

In another context, observers said that Al-Mesmary is pro-Gaddafi and he doesn’t hide this feeling, especially when he stated that killing Gaddafi was a crime.

Some close sources to Al-Mesmary find it strange that he talks about state security issues, mainly because he was known as an unknown poet who rights Libyan poems and says them for money. The sources added that Al-Mesmary is only able to talk about the kinds of Libyan poetry of the eastern side of Libya, the differences between the local Libyan songs, and maybe about the ways of categorizing the local poets in his area.

Al-Mesmary and his leadership started the war in Benghazi and put the all revolutionary groups and Islamic movements in one parcel, including Muslim Brotherhood. But they didn’t fight against Daesh. Instead, they gave the safe routes to leave Benghazi and go to the Sirte where they had been defeated at the hands of Al-Bunyan Al-Marsous under the leadership of the PC.

Al-Mesmary, who accused Qatar of intervening in Libya announced, last year that the joint air strikes of his forces and the Egyptian warplanes would continue until they control significant sites in Libya. He also praised the air raids of the UAE on Libyan locations. He tried to justify that by saying that the relationship between Egyptian and Libyan people makes it normal for the Egyptian army to intervene in Libya.