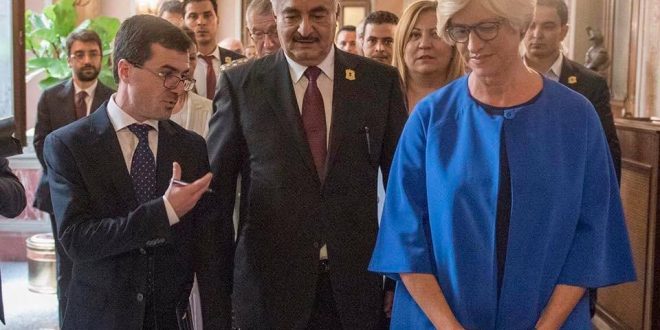 Italian officials urged Libyan military strongman Khalifa Haftar on Tuesday to “contribute effectively” to the U.N. effort to stabilize Libya, and ruled out any military solution to end Libya’s chaos.

Haftar met Tuesday with Defence Minister Roberta Pinotti as part of Italy’s efforts stabilize its former colony and stem the flow of migrants to Europe.

The ministry said Pinotti repeated Italy’s support for the U.N. process of dialogue to work toward elections “and hopes that all sides can contribute effectively to the strategy, excluding any military solution.”

Libya sank into chaos following the 2011 uprising that toppled and killed dictator Moammar Gadhafi. It is split between rival parliaments, governments and militias in the east and west. But in July, Haftar and his rival in the west, Fayez Serraj, pledged to cooperate.

Haftar, an army general, is the most powerful figure in the east and has touted himself as the main bulwark against Islamic militants in Libya.

In August, Haftar ordered his naval and air forces to confront any vessel entering the country’s territorial waters without permission after Italy began a naval mission to help stem a popular migration route at the behest of Serraj’s U.N.-backed government in the west.

The ministry said Pinotti repeated that any initiative Italy takes in Libya is done “in total respect of Libya’s sovereignty and adhering to Libyan requests.”

Italy’s parliament approved the patrols over the summer when the migrant flows from Libya to Italy seemed poised to reach new records in 2017. But the number of migrants arriving in Italy has dropped off precipitously, thanks to increased Libyan coast guard patrols and to verbal agreements reached among Italy, Serraj’s government and militias that are now impeding traffickers from operating in certain areas.