Home / Normal / After Rome, Hafter to head back to Paris 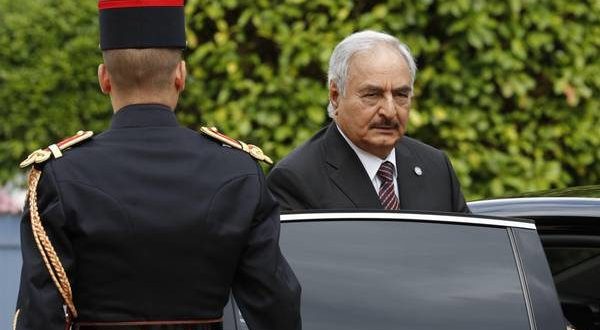 After Rome, Hafter to head back to Paris

Sources close to the head of the Libyan National Army, Field Marshal Khalifa Hafter, have confirmed reports that he will visit Paris tomorrow, Wednesday, for talks with the French government.

Earlier today, the usually reliable Paris-based Maghreb Confidential had said that it had been informed of the visit and that Hafter would be meeting with officials from the French foreign ministry.

Hafter was last in Paris two months ago for talks with Presidency Council head Faiez Serraj organised by French President Emmanuel Macron. These resulted in a ten-point deal between the two which included a ceasefire and new elections in the country. Since then, there has been little progress and earlier this month Macron sent his foreign minister Jean-Yves Le Drian to both Tripoli and Benghazi to try and breath life back into the agreement.

The sources close to Hafter, who was still in Italy today, said he would return to Benghazi by Saturday.

International Relations and CooperationSecurity Forces
All
2017-09-27
asaeid
Previous Gharyan mobilizes forces as military convoy tried to infiltrate into Wershiffana
Next These Libyan ex-militiamen were once linked to al-Qaeda. Now they wield power in a new order.