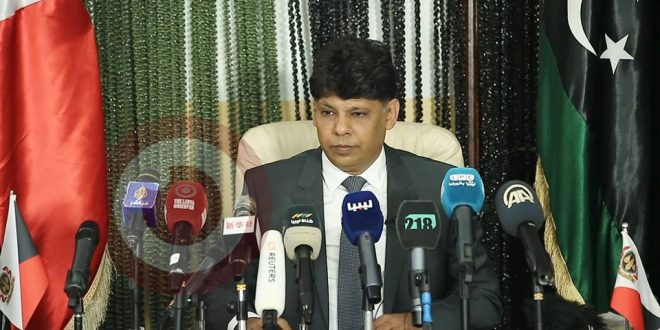 We were at the Public Prosecutor’s Office in central Tripoli for a highly anticipated press conference held by the head of the Interrogations Office of the Public Prosecutor’s Office, Siddiq Soor. The press conference was held to reveal the results of preliminary interrogations with ISIS captives held in custody after their loss in the war in Sirte.

Some of the main revelations indicated that the very first man to introduce the idea of ISIS in Libya was a man by the name of Hassan Bilaraj, who was jailed in Iraq in 2005 yet returned to Libya in 2012.

Bilaraj and his early associates planned the creation of three ISIS emirates in Libya; four main institutions would make up the foundation of each emirate.

The main institutions were arms, recruitment, immigration and border control and finally media. Brigades were formed to protect these institutions, the main ones being Border Protection Brigades, Recruitment Brigades and the Desert Brigades.

Looking at the slideshow presented by the Prosecutor’s Office, it was clear to see that the terror group was extremely organized and well on their way to creating a full functioning state.

Some of the Main traces of finance that supported the creation of ISIS were unintentional support by previous governments, which made payments to individuals who were registered in groups under the Interior Ministry, but later joined the terror group. Bank robberies were also a main method of finance as well as kidnapping and extortion. Financing also arrived from the main headquarters of the terror group in Syria and Iraq. Those in charge of the emirates were identified along with their current status, whether they were killed in action or still at large, most being Libyans originating from Sirte.

Many of the terrorists who set up safe houses in Sabratha were of Tunisian origin and planned to train their elements then transfer them to Syria and Iraq while sleeper cells were created to infiltrate other cities like Zliten, Misrata and Tripoli.

There were four nationalities for elements of ISIS totaling over 100, they were Libyan, Sudanese, Tunisian and Egyptian, and others ranged from Saudi Arabia to Qatar, Yemen, Algeria, even as far as the United States. The total number of nationalities captured or killed is 26.

The main routes taken by foreigners entering Libya were Tunisians and Egyptians who travelled towards the south, coupled with all those from countries south of Libya who would then travel north through the desert to Sirte.

Many assassination cases were solved as a result of interrogations when previously unsolved cases were traced to ISIS elements. The Tunisian journalists who were kidnapped in Libya were also mentioned by ISIS captives and the facts of how they were kidnapped was revealed to interrogators.

Some other interesting points was the fact that many previously unsolved bank robberies were revealed to be ISIS jobs and tracing a lot of the ISIS elements past linked them directly to Al-Qaida. Bombings that totaled over 200 were also attributed to ISIS after investigations leaded to prove so.

Soor stated that his office is continuing their investigations to reveal the resting place of the Egyptian Coptic Christians who were videoed by ISIS being beheaded in Sirte. Soor also stated that up to 800 arrest warrants have been issued for suspects linked to the terror organization ISIS.