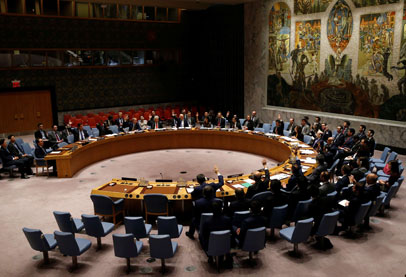 Condemning the continued smuggling of migrants through Libya and off its coast — thereby endangering hundreds of thousands of lives and undermining stability — the Security Council today extended until 5 October 2018 its authorization for Member States to intercept vessels suspected of being used for such purposes.

Unanimously adopting resolution 2380 (2017) this morning, the Council extended the authorization for a third one-year period, the first having been established by resolution 2240 (2015). By today’s text, the Council authorized Member States, acting nationally or through regional organizations, to inspect vessels reasonably suspected of being used for migrant smuggling or human trafficking from Libya, and to seize those confirmed to be engaging in such activities.

The Council stressed that its authorization of those measures would require good-faith efforts to obtain the consent of the vessel’s flag State prior to any action, and would not supersede sovereign immunity under international law. It again urged cooperation by all actors with Libya’s Government of National Accord.

Underscoring the resolution’s aim of disrupting criminal activities was not intended to prevent individuals from seeking protection under international human rights law and international refugee law, the Council emphasized that all migrants, including asylum seekers, should be treated with humanity and dignity, and that their rights should be fully respected. It again urged due regard for the livelihoods of those engaged in fishing or other legitimate activities.