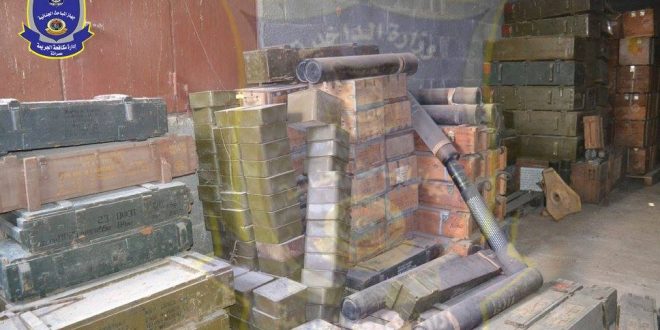 The Anti-Crime Unit of the Ministry of Interior in Misrata together with other forces has announced that it has, on instructions from the Attorney General’s Office, raided an IS hideout in the Ruwaisat area.

The raid led to the arrest of ‘‘Daesh members’’ found within the hideout, the brief report said, without specifying the number of people arrested. It is believed that the hideout belonged to former Benghazi Defence Brigade (BDB) and Benghazi Mujahedine Shura Council (BMSC) members based in the area.

The hideout was found to be full of a large hoard of ammunition and explosive materials, for detonating explosives and car bombs and contained other dangerous materials used for detonations, the brief statement said.

The arrests and raid comes on the back of the explosion at the Misrata law courts last week which led to four deaths and scores of injured. The court was in the process of putting IS members on trial.

It will be recalled that the head of Investigations at the Attorney General’s Office (AG), Sadek Assour, made some very interesting revelations on 28th September at an unprecedented and expanded press conference at the Court Centre in Tripoli on 28th September.

A 30-plus slide power point show accompanied the presentation showing details and photographs of accused IS members, organizational charts, links and routs of travel into Libya based on 14 months of investigation.

Assour had revealed that more than 1,000 elements belonging to terrorist organizations are wanted for justice, a large number of whom are wanted in Turkey, Syria and Iraq.

There were  still a lot of individuals in the Sudan and Tunisia who are recruiting members IS members for Libya and the Libyan Attorney General’s Office would send warrants to the states to which IS members are affiliated, Assour had added.

There were more than 200 suicide bombers and assassinations that were identified in all Libyan cities, and we have all the information about them and they will be brought to trial, he had added.

He had revealed that the AG’s Office had issued summons for some Libyan officials who had supported some terrorist figures financially, in contravention of the state’s financial law.

There are currently 250 cases before the courts, Assour had revealed.

Assour said that intelligence officers have been selected to conduct terrorist investigations efficiently and professionally. Many of those wanted were presently in Turkey and Syria, he had revealed.

Many IS members had left Libya for Syria and Iraq known to the AG’s Office by name. He said that the AG’s Office had information about cells trying to activate themselves in Libya, one of which is connected to the Hamas movement.

There is cooperation between the AG’s Office Bureau of Investigation and the Libyan Ministry of Foreign Affairs on issues of terrorism and immigration and Tripoli and Benghazi Investigations Bureaux are collecting data on terror cells.

Many murders, kidnappings and assassinations in his Sabartha were carried out by extremist groups, Assour confirmed.

Assour also revealed that a database of has been created containing all the information on 1,500 IS members.