Home / Normal / Over 7,000 immigrants said to be found in Sabratha after fighting ends 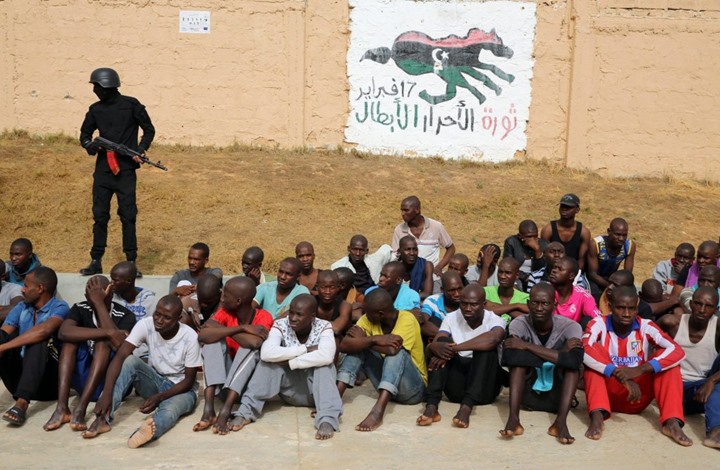 Over 7,000 immigrants said to be found in Sabratha after fighting ends

Over 7,000 illegal migrants who were in Sabratha hoping to take passage across the Mediterranean to Europe have been discovered in the town and since Friday have been or are being processed through its Dahman migrant transit centre, according to the head of the Libyan NGO, Migrace Organisation.

Ali Emgaidesh told the Libya Herald that the migrants had been held by the Amu Brigade in a number of locations in the town. They had had been discovered by the Anti-IS Operations Room (AIOR) which last week defeated the Amu and took control of Sabratha. The AIOR had then taken them to the Dahman centre.

“The forces of AIOR were carrying out raids on houses and buildings, supposedly hiding Dabbashi allies and migrants in Sabratha,” Emgaidesh said.

He warned that numbers at the centre could rise because AIOR were still discovering migrants around the town. He also said that it was also finding it difficult to cope with the existing numbers.

“Food and water are very limited, although some provisions are being donated by the local community,” he said.

Migrace is helping provide food, clothing and medicines for the migrants at the centre, and the International Organization for Migration (IOM), has been working at the centre since Saturday. But Dahman “has no basic facilities”, an IOM official said today.

After being processed, migrants are being sent by truck to detention centres elsewhere, some to the detention centre in Gharyan, but most to centres in Tripoli. They are usually moved around a hundred at a time. However, moving migrants to the centre in Gharyan has been proving particularly difficult at present, the IOM official told this newspaper, because of the road being blocked.

Like Emgaidesh, the head of the local coastguard, Bassem Gharabli, also appealed to the Presidency Council’s government of national accord and the international community for support to deal with the migrants.

Sabratha did not have the capabilities, he said. “We can’t provide care for them.”

Establishing a clear picture on the numbers involved is far from easy. Different organisations have different figures for the number of migrants found in Sabratha.

Apart from Emgaidesh’s 7,000, Gharabli last Friday said that the AIOR had found more than 6,000 migrants in different locations in the town “ready to leave illegally from the Libyan coast to Italy”.

For its part, the IOM, which has been working at the centre since Saturday also speaks of 6,000 migrants having been in Sabratha at the time the fighting started. But of these, it says, some 2,000 managed to make their way to Zuwara. “Some made their way by foot”, an IOM official said. The remainder were processed through Dahman.

“At least 4,000 migrants, previously held in numerous informal detention centres and camps [in Sabratha], have been transferred to a hangar in the town’s Dahman area where the IOM, the UN migration agency, is providing emergency assistance”, an IOM statement at the weekend read.

At that point it reported that 2,600 migrants (1,819 men, 704 women and 77 children) were being kept there by the Libyan Directorate for Combatting Illegal Migration (DCIM).

“More migrants from other locations in Sabratah were later transferred to the hangar and more are anticipated to arrive soon,” it added.

That has been the case. One official described the situation at Dahman today, Tuesday, as “chaotic”.

Some 2,000 migrants have already been moved out of the camp by DCIM which has stressed that all the migrants in Sabratha would be transferred to detention centres elsewhere. But for every hundred or so that leave many more are brought in. Many of the migrants, especially children, do so without anything and need medical assistance and basic aid, including food, water and core relief items.

The discovery of thousands of illegal migrants in places controlled by the head of the Amu Brigade, Ahmed Dabashi, is seen as giving the lie to his assertion last month that while he had been a people smuggler, he had stopped and was now working to prevent smuggling. Indeed, there were already claims at the time that the only smuggling he was trying to stop was that by his rivals, not his own operations.

The Migrace Organization started in 2016, working closely with the United Nations Refugee Agency (UNHCR) and with the IOM. As well as Sabratha, it operates in Zawia, , Zuwara, Zintan and Gharyan.