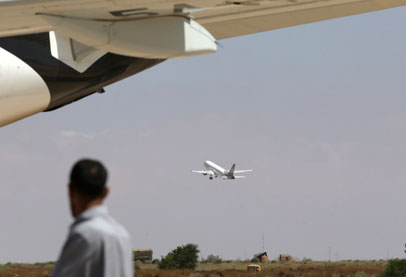 Mitiga airport flights resume after suspension due to airport attack

Flights from Tripoli’s only functioning airport, Mitiga, have resumed having been suspended this morning due to a clash between Abdelrauf Kara’s Special Deterrence Force (Rada), nominally part of the Ministry of Interior and aligned with the Faiez Serraj-led Government of National Accord, and armed youth from the Ghararat region of Soug Il Juma. Ghararat borders on the southern margin of Mitiga airport.

Reports say that armed Ghararat youth launched an attack on Mitiga airport in response to Rada arresting one of their members and for drug-related raids on their neighbourhood.

The Ghararat armed youth attacked the Mitiga base entrance attempting to free their member from the prison run by Rada in the expansive airport grounds which doubles as a military base and prison.

They were successfully resisted and repulsed by the Rada force but they continued to fire in the air in the direction of Mitiga airport raising security and safety fears. This forced the airport authority to susped flights and close down the airport for fear of aircraft being it or people getting injured.

The Ghararat youth subsequently put up road blocks in the roads leading into Ghararat to prevent Rada from penetrating their neighbourhood.

No damage was reported at Mitiga airport.