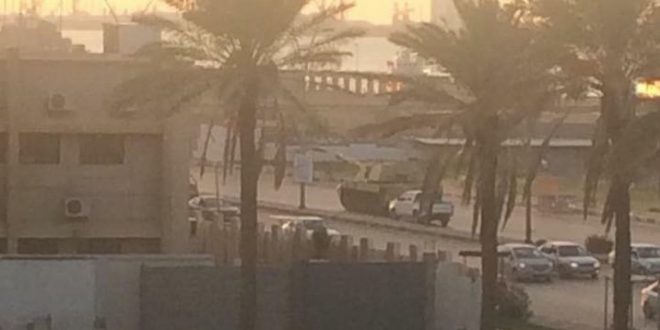 Clashes break out around Tripoli Port

The Central Security Force, best known as Nawasi Brigade, launched an attack on Tripoli Port Tuesday evening in an attempt to expel Brigade 50 which has been protecting it for years.

Eyewitnesses said both sides exchanged heavy fire, causing panic among local residents and disrupting traffic in the area, which is very close to downtown Tripoli.

Tanks and pickup trucks mounted with heavy machine guns were seen in Al-Shat Road heading towards the port.

The fighting is seen by many people as a struggle for power, but Nawasi Brigade said in a brief statement that it’s fighting to expel an armed group from the port and hand it over to state authorities.

Medical sources said two people were wounded in the clashes, which are still raging at the time of writing this news.

Both warring sides are under the Ministry of Interior of the Presidential Council.