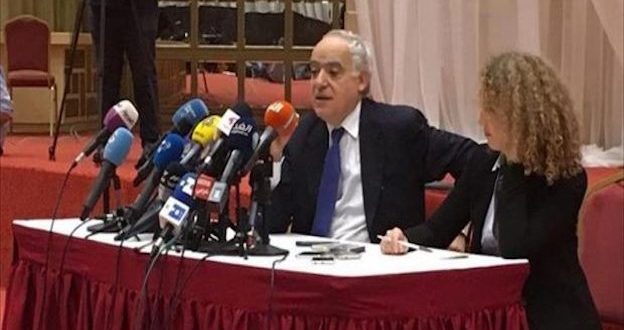 Local media reported sources from the dialogue committee of the House of Representatives (HoR) as saying that the UNSMIL’s Head Ghassan Salame met with the Heads of the HoR and High Council of State’s (HCS) committees Faraj Mousa and Abdelsalam Nasiya.

The sources added that the UNSMIL presented via Salame new ideas for them to ponder upon to resume the Tunisia-hosted negotiations.

The HoR committee was supposed to have a closed meeting in order to discuss the ideas and proposals of Salame, the sources added, saying that the meeting will review everything was proposed over the last days.

The UNSMIL suspended the meetings on Monday after the HoR committee had withdrawn, accusing the HCS of being unclear in their demands, calling on them to present written guarantees of implementing of what has been agreed upon in the first round of the Tunisia meetings early this month.

Whereas, the HCS reaffirmed that it did not call for any amendments and the HoR is the one that rejected approving the Libyan Political Agreement and demanded it be amended, requesting the HoR to present written documents for what it wants to be modified in the agreement.

In the meantime, sources from the meeting confirmed that the reason behind the HoR’s withdrawal is the objection of the HCS to annulling Article 08 of the additional provisions, which says all military posts would be vacant, including Khalifa Haftar’s, as it scraps his current post at the HoR army.