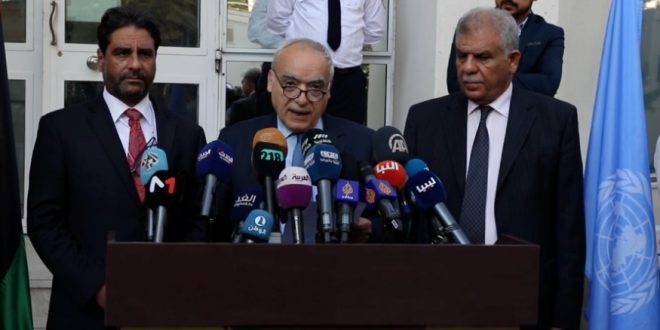 The UNSMIL’s Head Ghassan Salame brought the second round of the Libyan dialogue in Tunisia’s capital to an end on Saturday, stressing that the disagreement remains in place over Article 08 of the additional provisions between the House of Representatives (HoR) and the High Council of States’ (HCS) committees.

Salame said in a final statement from Tunis that the members of the HoR and HCS Joint Commission will return to Libya Sunday to discuss the results of the round.

“We have already started preparing for the national conference to include all Libyan parties.” Salame added, referring to the second stage of his action plan, which he pronounced last September at the UN Security Council.

After reaching a deadlock on Thursday, the Joint Commission resumed on Saturday morning at the UNSMIL’s headquarters in Tunis.

The talks were resumed on Thursday at the UNSMIL’s headquarters after two days of suspension of the withdrawal of the HoR members, knowing that Wednesday meetings ended with mutual meetings held separately for the two committees by Salame, who offered them both new proposals and ideas.

The first round of the dialogue led to an agreement on the reshuffling of the Presidential Council into a head and two deputies as well as a separate government, which is all as part of the first stage of Salame’s action plan.