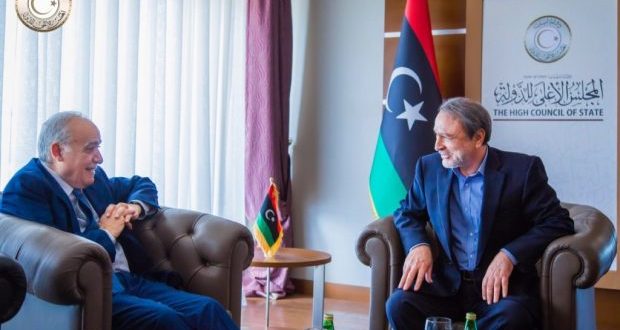 UN delegate in Tripoli to discuss latest round of Libyan talks

The Head of the UNSMIL Ghassan Salame arrived Tuesday morning in Tripoli and met with the Foreign Minister of the UN-backed Government of National Accord Mohammed Sayala and other officials.

Salame also met with the Head of the High Council of State Abdel Rahaman Al-Sweihli in order to discuss with him the results of the latest rounds of the Libyan talks that were held in Tunisia’s capital Tunis for over a month.

Salame said in a press statement after his meetings that he was pleased that he could form a joint drafting commission from the House of Representatives and the High Council of State to discuss the points of dispute between them.

He also indicated that the talks are mere “talks” and not a dialogue, which needs rules and regulations that are different from what they are doing now in Tunisia.