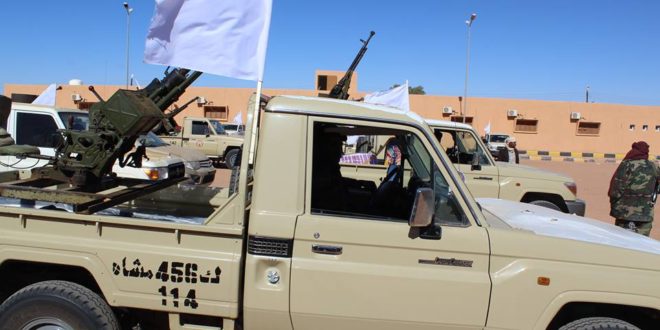 An unknown armed group attacked Tuesday night the personnel of Brigade 456 that is working as a peacekeeping entity in Ubari, southwestern Libya.

The armed group used 8 vehicles in the attack as they opened fire on the brigade personnel who were positioned at the Ubari hospital at 11.00 pm, according to the commander of the Brigade 456 Khalifa Al-Saghir, who spoke to Bawabat Al-Wasat Wednesday.

Al-Saghir added that the brigade personnel exchanged fire with the gunmen until they ran away, saying there were no casualties as what happened was merely a vandalism act that aimed to destabilize the city, which has been secure after the end of the armed conflict.

Brigade 456 of the Border Guard was appointed to secure Ubari and to play as a peacekeeping entity between the conflicting parties in February 2016.

Ubari saw armed fighting for some periods since late 2014 and up to the beginning of 2016 between Tubu and Tuareg tribes, leading to massive damage in the city as well as displacement among the residents. However, a ceasefire was put in place and Brigade 456 was tasked with making sure peace prevails among the conflicting parties in Ubari.