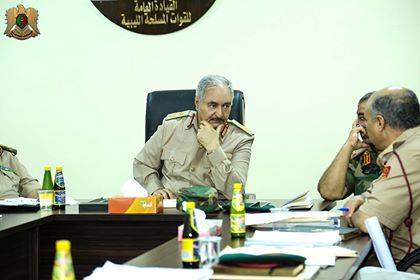 The head of the eastern-based Libyan National Army militia called for an investigation into the discovery of 36 unidentified corpses discovered near Benghazi on Thursday.
A statement signed by Khalifa Haftar on Sunday said the probe would try to identify the victims  and find out who killed them.

The corpses were found on Thursday night in al-Abyar, about 70km away from Benghazi, according to Reuters.

The incident was the latest in a series of discoveries of corpses, some showing signs of torture and gunshot wounds, on territory controlled by the the Haftar-led militia.

Allegations of abuse by Haftar’s men who are backed by the UAE and Egypt, come as the east Libya based commander met Italy’s defence minister and security chiefs in Rome last month, bolstering his stature as a key player in international efforts to stabilise the oil-rich nation.

Haftar does not recognise the authority of the UN-backed Government of National Accord based in the capital Tripoli, instead backing an alternate Tobruk-based administration set up in the country’s east.

The UN in June released a report accusing the UAE of supplying helicopters and other military aircraft to Haftar in violation of a UN arms embargo.

Haftar’s forces have repeatedly been accused of carrying out war crimes.