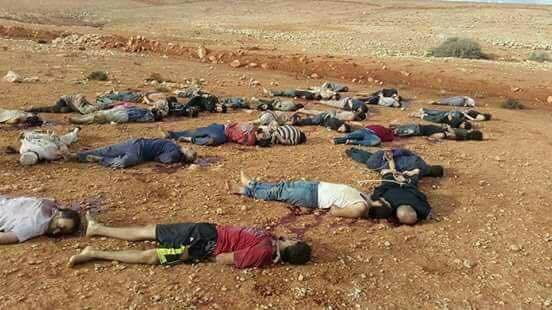 The Presidential Council has issued a statement condemning the “heinous crime” and the “horrifying act” that led to the wholesale killing of 36 persons after being tortured then tossed on the road in Al-Abyar district in Benghazi.

The statement issued on Sunday said that this act is only committed by inhuman individuals and those who are stripped of their ethics, morals and manners as well as religion, adding that such an act goes at odds with the efforts to build democracy in Libya, where human rights should be respected and violations be brought to justice.

“There will be a thorough investigation in coordination with the Attorney General’s office to bring the criminals to justice.” The Presidential Council added.

Reactions weighing in on the brutal massacre topped Facebook walls and were mostly accompanied by the sad and angry emojis.

The reactions included the UNSMIL, which tweeted that it “condemns in the strongest terms the heinous crime resulting in the killing of at least 36 whose bodies found in Al-Abyar area,” calling for immediate investigation to bring perpetrators to justice.

Likewise, the Italian Embassy in Libya’s capital, Tripoli, tweeted: “Horrified at the sight of the bodies discovered in Al-Abyar. Such a heinous crime must not go unpunished.”

Reactions are still coming out from different local and international stakeholders in condemnation to the crime that scandalized time and time again the fragile security situation in east Libya, where the controlling forces and leaderships claim to have regained power of police and military after eliminating the terrorist militias.