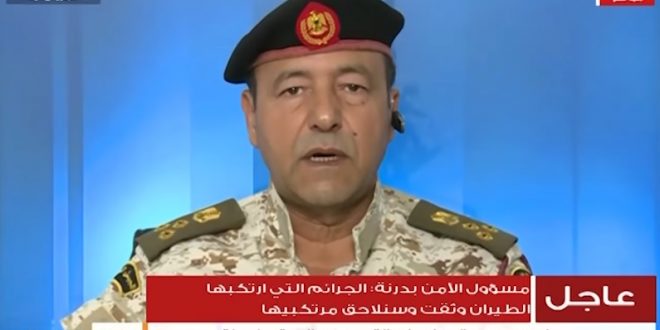 Speaking to Tanasuh TV Channel on Tuesday, Ganaidi, Chief of Military Intelligence of Al-Bonyan Al-Marsoon Operation, demanded Egypt, the UAE and the Saudi Arabia to keep hands off Libya.

“Libya is still under Chapter 7 of the UN Charter, we demand the UN Secretary General to urge these countries to keep hands off Libya,” he said, reacting angrily to Egypt’s alleged airstrikes on Derna that left a dozen civilians, including women and children, dead.

He added that the Libyan Army officers may carry out retaliatory attacks inside Egypt if the latter keeps intervening in Libya’s affairs, demanding Chairman of Presidential Council Fayaz Sarraj to take a strong reaction against the Arab intervention or leave the country “on board the vessel that brought him to Tripoli”.

Meanwhile, Chairman of Presidential Council Fayaz Sarraj has ordered the Military Prosecutor to investigate Ganaidi’s “irresponsible statement” against what he called “a sisterly country”.

15 civilians, mostly women and children, were killed and at least 25 others injured in airstrikes on Al-Fatayeh district in Derna on Monday.

Egypt and the UAE are fueling tensions in Libya by backing the country’s eastern warlord Khalifa Haftar and supplying him with arms and ammunition to defeat his opponents. Both Arab countries had carried out several airstrikes against Haftar’s opponents in many Libyan cities.