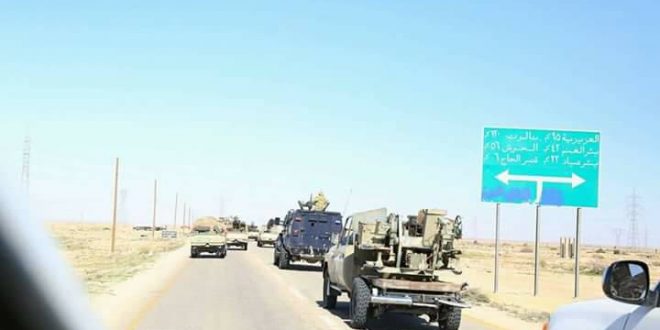 Fighting erupted in Wershiffana district in western Libya between local armed groups and the forces led by commander of the western military zone, Osama Jowaili, who was appointed by the Presidential Council.

According to reports from Wershiffana and to statements from the district’s Council of Elders, the clashes got intensified around the Checkpoint 60 in the district.

In the meantime, the Chief of Staff of the Presidential Council Abdelrahman Al-Taweel denied knowing of the military operation led by the commander of the western region’s military zone.

Al-Taweel told a media outlet that he did not appoint any forces led by Jowaili and had no knowledge of whether he was appointed by the Presidential Council or not.

Ahmed Belwaer, a member of the Council of Elders, told local media in Libya that the district is awaiting, adding that the clashes caused huge material damage including two houses.

Meanwhile, the Zintan Military Council called on all the residents of Wershiffana to stay away from the gatherings and military areas, emphasizing the need for avoiding taking to the streets or going out in the areas near the fighting.

Al-Mabrouk Bu Amid, the Head of the Social Council of the city, stated to the media that what is being plotted for Wershiffana by Zintani “militias” led by Osama Jowaili and by the blessing of the Presidential Council” aims at entering Tripoli.

“The claims that the operation is for defeating and eliminating criminals in Wershiffana is just a pretext for the looming war.” He said.

He also explained, to Al-Nabaa TV Channel, that the operation is carried out by mercenaries from Sudanese Justice and Equality Movement, who were recruited for the incident and led by the western military zone’s commander.