Home / Normal / Al-Hassadi: To defeat terrorism we should deal with its roots 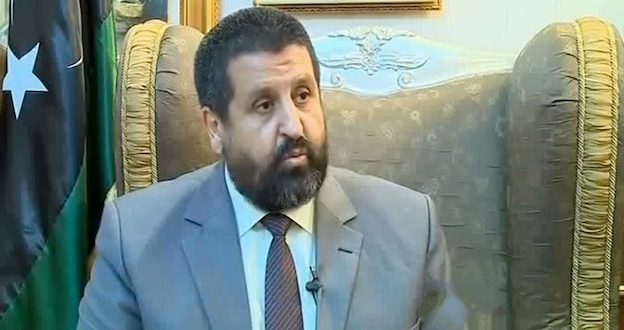 LIBYAPROSPECT had interviewed Al-Hassadi asking him about his opinion about the situation of Derna, and the sufferings of its citizens from the blockade that was imposed months ago by the Dignity Operation under the leadership of General Khalifa Haftar.

Al-Hassadi talked to LIBYAPROSPECT about his thoughts in fighting the terrorism, raising that Haftar is making profound mistakes because he is using fighting terrorism for his political and military agendas.

Al-Hassadi told LIBYAPROSPECT that protecting the civilians should be the priority of the International Law and all laws and norms as well as the Universal Declaration of Human Rights (UDHR).

Al-Hassadi told LIBYAPROSPECT that It is important to remind that Derna was bombarded more than once targeting the civilians and the buildings. The air shelling targeted even a mosque around Bab Tobruk as well as the hospital in Derna and destroyed the department of kidneys.

Therefore, the Security Council should take the responsibility in protecting the civilians in Derna. We also call the international human rights organizations to do the same thing.

LIBYAPROSPECT: The demonstrators in Derna had chanted against the commander of the Dignity Operation, General Khalifa Haftar, and the Egyptian President, Abdul-Fattah Al-Sisi. Do you think that the Egyptian air forces had carried out the last air raids on Derna?

Al-Hassadi: From our side, we met the head of the Presidential Council (PC) of the Government of National Accord (GNA), Fayez Al-Sarraj, and asked him for starting a local investigation. We also asked him to call for an international investigation on the air raids that killed children and women.

It wasn’t the birds of flocks who bombarded the children and women in Derna; it was actual war aircrafts.

It is important to remind that Derna was bombarded more than once targeting the civilians and the buildings. The air shelling targeted even a mosque around Bab Tobruk as well as the hospital in Derna and destroyed the department of kidneys. Derna was bombarded on 15th February 2015, then on 7th February 2016 and on 26th May 2016. Then the latest one on 30th October 2017.

The Egyptian government had adopted, in previous, the air raids on Shiha area and Bab Tobruk under the justification of retaliation for killing the Christian Egyptians in the city of Sirte that located more than 800 km away from Derna.

On the other side, Haftar’s warplanes had bombarded Derna many times. I remember that they had targeted Shennib building in central Derna wounded civilians and killed one person. Therefore, we called for a local and international investigation. We also asked the Attorney General to start an investigation to know who was the criminal.

LIBYAPROSPECT: What are your efforts, as the State Council, to end the sufferings of the inhabitants of Derna and to end the war crimes against the children and women?

Al-Hassadi: We started our efforts since the time of the General National Congress (GNC) to protect the city of Derna from the shelling and the blockade. And now we are still trying our best politically, legally, and socially.

On the local Libyan level, I contacted Al-Sarraj more than once. I met him on Thursday and asked him to do his job in protecting the civilians in Derna and start investigations.

I talked to the head of the House of Representatives (HoR), Ageela Saleh, in our meeting in Brazzaville, about the crisis of Derna. I gave him a proposal to solve the crisis.

We also communicated with the notables of the Cyrenaica tribes, including Al-Obaidat and Al-Barassa Tribes, asking them for doing their social role in ending the besiege and delivering the needs to Derna. It is vital to remind that when I talk about Derna, I mean the civilians, not the armed militants.

On the legal side, we provided a note to the General Attorney calling him to start his necessary legal procedures against the criminal actions.

We also talked to the United Nations Envoy to Libya, Ghassan Salame, clearly, in the first and second meetings; we told him that the United Nations Support Mission in Libya (UNSMIL) should do its active and transparent role in ending the blockade to help in delivering the humanitarian needs to Derna, primarily the medical, the fuel, gas, and the cash liquidity. There is no liquidity in Derna since Eid Al-Udha.

Internationally, I had contacted some ambassadors, including the French, the British, and the Rwanda ambassadors. We also talked to the Dutch Foreign Minister, in our visit to the Netherlands, about the situation of Derna.

LIBYAPROSPECT: We heard that there is an initiative to lift the siege on Derna through sending a ship over the sea to Derna, carrying notables and other elites as well as medical and food aid. Do you have any relationship with this initiative?

Al-Hassadi: In the State Council, we had formed a committee, we named it the Relief Campaign for the people of Derna.

We talked to the Red Crescent in Tripoli, the director of the seaport, and other sides to prepare for moving an aid convoy to help Derna, but unfortunately, the attempt didn’t succeed.

Then, I asked Salame to help us in sending the aid convoy, but the problem was that no shipment company agreed to do the job because everyone was afraid of bombing the ship.

We are still trying because I think that the sea is the easiest way to deliver the support and help to Derna, either from Libya or from abroad. I wish to find international organizations that can make this humanitarian effort. We also called the Red Cross and the Red Crescent to supervise the convoy; they can also inspect and search it through any official and recognized legal third party. Our target is to deliver the aid to the inhabitants of Derna.

After the last crime war in Derna, we had discovered the size of the humanitarian disaster in Derna, especially in the hospital, which suffers from the lack of medical instruments, tools, and the medication.

The hospital had called for providing the essential medical instruments, such as the X-ray, the CT, and the sterilization devices because the devices in the hospital are so old and out of service. But even though, some doctors tried to provide some services.

LIBYAPROSPECT: The Italian and Tunisian Foreign Ministers and the French Ambassador had promised the head of the State Council, Abdul-Rahman Al-Swehli, to press on the Security Council to convene urgently to solve the crisis in Derna. In your opinion, why do you think that they only promise with no any international actions?

Al-Hassadi: We had heard many promises from diplomats of some countries to end the crisis in Derna, but we know that each state in the International Community has its interests and agendas.

We had called some ambassadors through Salame and the UNSMIL to investigate. But we, as representatives of Derna, will not favour any armed side. We had provided our initiative calling for dismantling the armed formations, as the Political Agreement says. We asked for reactivating the state institutions in Derna, and the inhabitants in Derna had sent out their message clearly in the funerals of the victims who were killed in the last air raid. The citizens of Derna announced that they refuse to let the militias of Haftar inter Derna.

It is known that Haftar had done very bad in Benghazi because he tried to use fighting terrorism in a political agenda to gain political and military power.

We, in Libya, are united to fight against terrorism the same way of fighting Daesh in Sirte through the operation of Al-Bunyan Al-Marsous, which was decided by the PC away from any political agendas.

What happened in Benghazi was a terrible example because the assassinations are still there. Al-Zait street in Benghazi is yet witnessing throwing human bodies every day, and we saw the massacre in Al-Abiar, last week.

From our side, we are fighting the terrorist groups that were mentioned in the Political Agreement such as Al-Qaeda, Ansar Al-Sharia, or Daesh. We consider that fighting terrorism shouldn’t be used for political agendas or defeating political rivals.

LIBYAPROSPECT: Observers ask why Egypt had bombarded Derna many times. Can you explain that?

Al-Hassadi: I think that the Egyptian government and Haftar don’t want any political or social solutions in Derna, they want to make Derna a tense area so they can manage to implement some agendas. On the other hand, I think that it is easy to find solutions for Derna, but we need a strong political will and active social actions.

We had noticed that after every terrorist operation in Egypt the Egyptian air forces bombard Derna under the justification of fighting terrorism. The Egyptian government says that the terrorists and the weapons come to Egypt from Derna while Haftar’s forces besiege Derna from all sides.

Let me respond to the justifications of the Egyptian government; in case it is true that terrorists and weapons go to Egypt from Derna; this means that Haftar and his forces are accused of smuggling the terrorists and weapons to Egypt because Haftar’s forces are spread out everywhere in the east, and they are blockading Derna. In 2015, when Derna Shura Council defeated Daesh from Al-Fataeh and Derna, Haftar’s forces and their checkpoints didn’t stop the escaping elements of Daesh. Instead, they helped them in escaping all the way from Derna to Sirte because Haftar wanted to make Sirte as a tense point that gathers terrorists from inside and outside Libya.

There is another issue that I should mention here; it is the crimes of Haftar’s forces in killing without courts, the same way Daesh kills its prisoners.

Let me talk about the phenomena of extremism and terrorism; we cannot deny that there are ones who adopt Takfiri and terrorist ideologies in Libya, either in Derna, Benghazi, Sabratha, or other places. The phenomena need treatments, but most of the ways in dealing with the phenomena are wrong.

I think that there are no real efforts to deal with the phenomena, either in Libya or elsewhere. Terrorism exists in the environments of subdual, tyranny, persecution, repression, demonization, coups, assassinations, and injustice.

If we want to defeat the terrorists, we should treat the roots of the problem. The wrong ways won’t end the problem.

I stress that using fighting terrorism for political, economic, or military agendas will not defeat it. It might help in spreading out the terrorism and moving it from place to place because we have seen the life cycle of terrorism that changes itself from Al-Qaeda to Ansar Al-Sharia to Daesh, moving from Iraq to Syria to Libya and Mali.

Let me call the International Community, the Security Council, and all Arabic and Islamic countries, through LIBYAPROSPECT, to come to a unified vision to fight the terrorism in the right way away from using it as I mentioned above.

It is worth pointing that terrorism doesn’t exist firmly in the societies of the social justice, good economies, and freedom. So, it is essential to reform our communities to reduce terrorism step by step.

One of the mistakes in fighting terrorism is what I call it (the basket), which Haftar adopts. Haftar had put all persons who disagree with him politically, intellectually, socially, culturally, or economically in one basket, as terrorists, to get rid of them. Unfortunately, this is what we have in the third world.