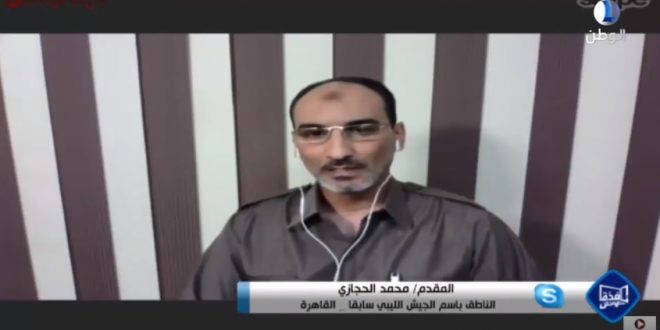 Speaking to Watan TV, Hijazi said that Haftar is responsible for tearing apart the social fabric of the people and is directly responsible for the cash crisis as well as the assassinations that have become common place in eastern Libya.

He added that Haftar has deliberately delayed the completion of the war in Benghazi, which has led to more deaths and instability.

“We were deceived when he said he did not want any position of power, then he raised his own status and gave his sons, who are civilians, military ranks and now he is seeking a mandate to rule all of Libya,” said the former Dignity Operation spokesman.

“Haftar, his sons and close entourage have been receiving huge sums of money, making them extremely rich, then forgot about the sacrifices made by others that helped them rise to the status they are at now”. He added.

Hijazi also stated that there is unrest, anger and opposition within Haftar`s self-styled army, but many are afraid of being subjected to torture and assassination.

Hijazi then turned his focus on what is known as the Salafist Battalion that fight alongside Haftar`s forces, especially one of its commanders, Ashraf Mayar and their Palestinian mufti, referring to the Saudi-born cleric Osama al-Otaibi saying “They are behind the assassinations, political killings, secret prisons and crime on the streets”.

Hijazi added that the forces of Haftar, which consist of entities and militias that are out of his control, participated in many crimes, and that the actual army of Haftar controls but a small part of Cyrenaica let alone all of Libya, as Haftar has previously claimed.

Hijazi accused Haftar, Mismari, Nadori and Jarushi as the main cause of disaster and the massacre which is taking place on the peaceful city of Derna.

He concluded his interview by saying that he is extremely worried for his life and is in great danger, which caused him to flee to Egypt as a form of protection, especially as he is in possession of formal documents that could damage Dignity Operation forces and their leaders.

Mohammed Hijazi is the former spokesman of Dignity Operation, but announced that he was no longer a part of it in January of 2016, when he confirmed that the operation was derailed by corrupt leaders using it for personal goals.