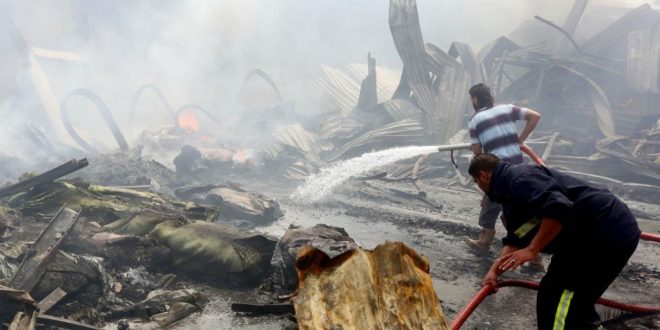 Derna medical sources said that most victims of the October 30 were from the same extended family and included 12 children, ages 2 to 16.

The Libyan National Army forces (LNA), which has conducted airstrikes on Derna targets in the past months, denied any involvement in the attack in a televised statement, blaming “terrorists” and promising an investigation. Medical sources said that no fighters were known to have been killed or injured in this attack.

“An aircraft bombs a Libyan city and kills 16 civilians, yet none of the warring parties accepts responsibility for the attack or names the intended military target,” said Sarah Leah Whitson, Middle East and North Africa director at Human Rights Watch.

“Derna residents run the risk of repeat incidents unless authorities start making good on their promise to investigate and hold those responsible for unlawful attacks to account.”

The LNA, under the command of General Khalifa Haftar, imposed a siege on Derna in August 2016 in an effort to drive out fighters from the al-Qaeda-linked militant group Derna Mujahideen Shura Council (DMSC).

The DMSC has controlled the city since participating in ousting the Islamic State group (IS), in April 2016.

The Derna airstrikes hit two locations, one in the al-Fatayeh neighbourhood and the other in the rural area of al-Arqam, director of Derna’s main hospital Dr Mansour Ben Fayed told HRW.

Ben Fayed said the 13 of the 16 killed and brought to the hospital were all women and children who had been attending an event at a private house.

Previous airstrikes on Derna have not been investigated, depite high civilian death tolls. Human Rights Watch said. Joint airstrikes by Libyan and Egyptian forces on Derna in February 2015 resulted in at least seven civilian casualties and damage to civilian structures.

In February 2016, unidentified aircraft attacked a hospital in Derna, killing at least two civilians and damaging the hospital.

In May 2017, the Egyptian air force reportedly conducted airstrikes on Derna in retaliation for the killing of 28 Egyptian Christian Copts from Minya. The killings were later claimed by IS. No civilian casualties were reported.

Armed conflicts since 2014 have left the country with two rival governments claiming legitimacy. The United Nations-backed Government of National Accord (GNA), based in Tripoli, and its rival, based in the eastern city of Tobruk, and controls large swathes of eastern Libya, with the exception of Derna, and parts of the south.

After the ouster of IS from Derna, the DMSC militant alliance took control of the city. The LNA has launched operations to “liberate” Derna from the DMSC by imposing a seige.

According to international humanitarian law, all attacks must be directed at military targets. Deliberate, indiscriminate, and disproportionate attacks against civilians and civilian structures are prohibited, and warring parties must “take all feasible precautions” to avoid or minimize harm to civilians.

The laws of war require all parties to allow the “rapid and unimpeded passage” of humanitarian aid to civilians at risk, including in areas under siege, and to allow civilians the right to leave.

“Warring factions should impartially investigate possible war crimes by their forces,” Whitson said. “Sadly, too many wartime deaths of civilians have simply been ignored.”