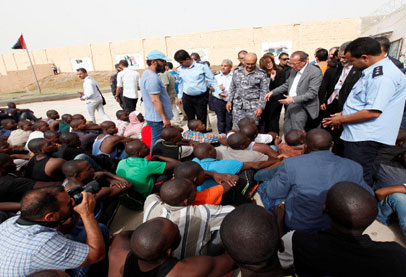 Diplomats at a UN Security Council meeting on human trafficking called Tuesday for investigations into slave auctions in Libya following a CNN report last week on the practice.

“In recent days we have all been horrified by images of African migrants being sold as ‘goods’ in Libya,” said UN Secretary-General António Guterres said. Guterres, former head of the UN agency on refugees, added, “slavery and other such egregious abuses of human rights have no place in the 21st century.”
“Those images on CNN shocked because they showed that this most degrading form of exploitation is tragically not a thing of the past,” added Matthew Rycroft, the UK’s ambassador to the UN. “It is happening today, and it is happening on our watch.”
In recent years the United Nations has stepped up efforts to combat the crime of human trafficking, which affects millions and intersects with numerous UN agencies that are not set up to combat it.
Rycroft told reporters, “those videos that we saw from Libya of people being sold into slavery just demonstrate that this is an issue happening in each and every country around the world today. It is not behind us by any means.”
After obtaining footage of a human auction in Libya, a CNN team traveled to that country in October to investigate. It witnessed a dozen men sold at an auction outside of the capital, Tripoli — some for as little as $400. CNN also was told of auctions taking place at nine locations in the country.
Libyan authorities have launched a formal investigation into the auctions. The probe is being overseen by the government’s Anti-Illegal Immigration Agency.
“To see the pictures of these men being treated like cattle, and to hear the auctioneer describe them as, quote, ‘big strong boys for farm work,’ should shock the conscience of us all,” US Ambassador to the UN Nikki Haley told the council. “There are few greater violations of human rights and human dignity than this.”
Haley and other diplomats called for an investigation that would hold the perpetrators accountable.
The Security Council also adopted a resolution Tuesday designed to crack down on human trafficking and slavery.
Ambassadors from Senegal to Sweden also blamed trafficking’s root causes: Unstable countries, poverty, profits from slave trading and lack of legal enforcement. Secretary-General Guterres also noted how terror groups, from ISIS to Boko Haram, are forcing women and children into “de-humanizing servitude” — actions that may amount to war crimes and crimes against humanity.
“It is our collective responsibility to stop these crimes,” Guterres said. He added that countries must hunt down traffickers while boosting humanitarian aid and allowing more migration to the developed world. Countries in many parts of the world are experiencing raging debates about whether to admit more immigrants.
Guterres cited a UN report which said increasing number of victims trafficked from Iraq, Syria and Somalia are appearing in Asia, Europe and the Middle East.
“Having a response coordinated across the whole of the UN family will be a crucial part of the international methods to combat slavery,” the UK’s Rycroft said.
Haley, the US ambassador, said, “we are encouraged by the Secretary-General’s focus on improved UN coordination on trafficking of persons in conflict.”
International Relations and CooperationSecurity SituationTrafficking and Migration
All
2017-11-21
asaeid
Previous Serial killer Al-Werrfalli claims Dignity Operation wants to terminate him
Next Sudan to address illegal migration to Libya in cooperation with AU