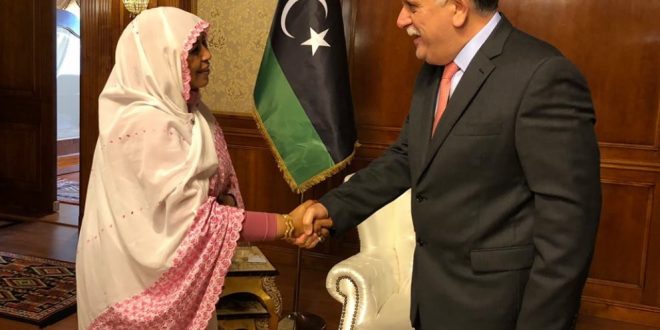 AU offers help to stop abuse of migrants in Libya

The African Union (AU) has offered to help the Libyan authorities detect human traffickers as well as provide facilities for migrants moving through the country. The offer came in talks today between Presidency Council (PC) head Faiez Serraj and the AU’s Commissioner for Social Affairs, Amira El Fadil, and follows allegations of migrants being auctioned as labourers broadcast by CNN.

No details of what the AU might offer have been disclosed.

EL Fadil and her delegation were sent to Tripoli by Moussa Faki Mahamat, the chairman of the African Union Commission, to discuss the auction issue with the Serraj administration, ensure that it was being properly investigated and make sure that it would never happen again.

According to a PC statement, the offer was welcomed by Serraj. He assured El Fadil that if the allegations were proved correct, those involved would be punished. Such actions did not represent Libya morality or Islam, he said. The country would cooperate with the AU in addressing the matter. For her part she welcomed the fact that PC had opened an investigation into the reports.

She and her team also met the PC’s justice minister, Mohamed Abdel Wahid Abdel Hamid. He told her that his ministry would cooperate with the UN’s refugee agency, the UNHCR, and the International Organisation for Migration in the investigation which the Attorney general had ordered.