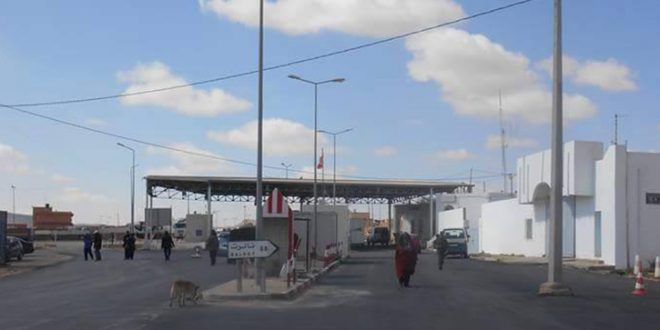 The Libyan-Tunisian border that lies at the Wazin and Dehiba towns has been shut down since last Wednesday.

The closure of the border crossing allows returnees from Tunisia and Libya to cross to either side of the land, besides the suspension of all other activities via the border such as trade and humanitarian cases.

According to sources from the towns, the shutdown came after the Libyan Customs Department had seized goods for residents of Dehiba town on the Tunisian side, where the residents got vexed by the incident and threatened the security of Libyan cars inside the Tunisian soil.

Afterwards, the Tunisian residents blocked the road leading to the border crossing with sand barriers, which were later removed by the Tunisian authorities, yet the Libyan cars remained banned from crossing for they could be targeted by the residents.

The sources also reported that representatives from the towns on the Tunisian side, security authorities at the border, and civil societies are trying to negotiate with the Libyan counterparts to end the issue and resume traffic and travelers’ activities via the border.

“However, there is no sign of improvement on that matter yet.” They added.

Dehiba-Wazin border crossing has been shut down many times before despite the fact that it remains more stable than Ras Ajdair border, which suspends traffic every now and then, given the Libyan authorities’ insistence on banning any goods cargo from crossing to Tunisia, saying they are smuggling operations more than trade leading to rocketing prices in Libyan markets, which helps smugglers to prosper on currency exchange rates’ differences.