Home / Normal / Who is really responsible for Libya’s slave trade? 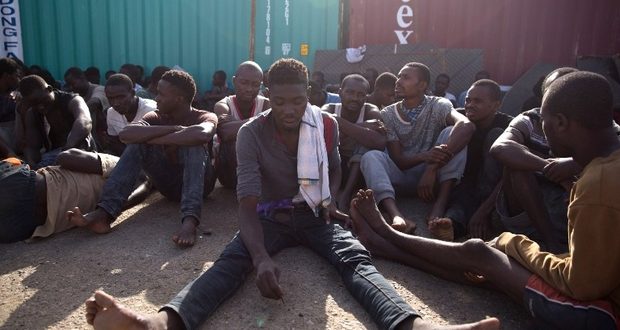 Who is really responsible for Libya’s slave trade?

Reports in recent weeks of sub-Saharan African migrants being sold as slaves in secret auctions in Libya, have caused shock and global condemnation.

The issue was brought to light by a CNN film crew, who secretly filmed one of the auctions taking place in Libya just under two weeks ago. It is important to state – as a Libyan – that we wholeheartedly condemn the practice of slave trading, and that those who are proven to be involved should be brought to justice.

The CNN report was successful in drawing attention to the migration problem as a whole, which, rather than being just a Libyan concern, is a global one.

Some European countries have been evading their international responsibilities and their commitment to international laws; and in doing so, are effectively leaving passing the buck to Libya.

France and Italy know very well that the millions of impoverished and persecuted sub-Saharan Africans passing through the country begin their journey elsewhere. Desperate to reach Europe, travelling via Libya often presents the nearest and most convenient root.

France is now requesting an “urgent” meeting of the UN Security Council to discuss the issue of treatment of migrants in Libya. French Foreign Minister Jean-Yves Le Drian has said that France will advocate for international sanctions against Libya if its justice system fails to act.

Something the French minister did not explain, however, is which government in Libya he will advocate sanctions against? Is it the one in Tripoli, which he recognises above the table? Or the one in the East, controlled by Haftar, which he deals with under the table? And what sanctions can be imposed successfully on a country that is already a failed state?

The CNN story was not the first to raise concerns over the practice of enslaving African migrants in Libya. But the power of live images and television helped to generate such a widespread reaction.

Last April, the UN migration agency the International Organisation for Migration (IOM) issued a press release warning of “Slave Market” conditions endangering migrants in North Africa. The report quoted migrants who have been returned by the IOM to their countries of origin after being held captive for months in Libya.

One Senegalese migrant told the IOM of how he had to pay the equivalent of US$320 in order to be transported by traffickers from a well-known migration hub in North Niger (Agadez) north into Libya.

When the Senegalese migrant arrived in Sabha, south of Libya, the driver told him that he hadn’t been paid by the traffickers and that he was transporting the group of migrants to a parking area where “Sub-Saharan migrants were being sold and bought by Libyans, with the support of Ghanaians and Nigerians who work for them”.

In order for the Senegalese migrant to be ultimately released, his Libyan captive asked for a sum equivalent to US$970 “to be paid via Western Union or Money Gram to someone called ‘Alhadji Balde’, said to be in Ghana”. This confirms the global nature of the trafficker’s web involved in these illegal practices.

In Libya, especially over the last three years of civil war which has seen the breakdown of security, hundreds of Libyan citizens have also been subjected to kidnapping for ransom. In many cases, a Libyan kidnapper sells the person to another kidnapper for a sum of money, simply because the second kidnapper can keep and secure his victim for a longer period of time, until a much higher ransom is paid, in a practice known as “ransom trading”.

Some migrants who reach coastal cities of Libya hoping to reach Europe by boat, need to pay traffickers an average of 2,000 euros, according to witness reports by migrants.

According to one scenario, traffickers who have brought migrants from their countries of origin through Niger into Libya do not get paid – or at least claim as much – they then hold these migrants captive. A Libyan farm owner may then pay the trafficking fee (it could be around US$400) and take the migrant to work on a farm for many months until they earn enough to pay for the cost of crossing the sea to Italy.

This is a very realistic scenario, confirmed by social media reports by Libyans close to the migration scene. It denies humans their basic freedoms, including the freedom of movement.

Libya is a failed state with a very weak central government that cannot provide security or basic services, even for its own citizens. The numbers of African migrants
experiencing inhumane conditions in detention centres in Libya has recently swelled, mainly due to a totally shambolic failed European policy.

Western media outlets including he The Washington Post have reported that Italy for example is paying the same Libyan traffickers more money, in order to stop them sending migrants on boats to Italy.

Italy’s policy of returning migrants to Libya has been sharply condemned by the UN human rights chief, Zeid Ra’ad al-Hussein, who described it as “inhumane”. The Guinean president, Alpha Condé, has also voiced his criticism of Europe’s policy and stated recently that “the refugees are living in extremely bad conditions,” and added “Our European friends were not right to ask Libya to keep immigrants (in detention).”

Sub-Saharan Africa is facing major challenges: 60 percent of the population is under the age of 25 and many of these young Africans are suffering from poverty and persecution, with no for improvement hope in sight. They see migration to Europe as their only route for a better future.

This week, Europe and Africa come together in the 5th African Union – European Union (AU-EU) summit in Abidjan, Côte d’Ivoire. This is a timely opportunity for European leaders to show commitment to solving a global migration problem by adopting a holistic long-term approach.

Such an approach must recognise that sub-Saharan countries, where many migrants originate from, should be helped to develop economically with direct European investment. Once there is economic growth, jobs will be created and living standards will improve. Young Africans will then be encouraged to stay, rather than risk their lives taking a dangerous route through Libya in order to get to Europe.

Meanwhile, as a quick response to a migrant crisis that has accumulated recently in Libya, European countries should seriously consider granting them asylum in Europe. Libya cannot be used as a convenient place to park the blame for the international community’s failure to deal with a global migration crisis.